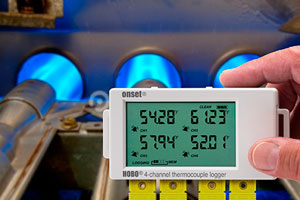 Onset has released its HOBO UX120 Thermocouple Logger, a four-channel LCD data logger for measuring and recording temperature in a broad range of monitoring applications. The new logger records temperatures over a broad range (-260⁰ to 1,820⁰ C) and can accept up to four J, K, T, E, R, S, B, or N type probes. This flexibility enables the logger to be used in a range of monitoring projects. In addition to accepting four thermocouple sensors, the logger features an internal temperature sensor for logging ambient temperatures, further extending the range of application possibilities. The HOBO UX120 also streamlines temperature monitoring applications. It features an LCD that visually confirms logger operation and battery status, eliminating the need to connect the logger to a computer to view the information. As the logger records temperatures, the LCD refreshes every 15 seconds to provide a near real-time readout of current temperatures as well as minimum, maximum, average, and standard deviation statistics. On-screen alarms can be set for each temperature channel to notify users if temperatures exceed high or low thresholds.  The logger also features a large memory capacity capable of storing 1.9 million measurements. This enables the loggers to be deployed for longer periods between offloads. Firmware is user upgradeable, and the logger offers start, stop, and restart pushbuttons to make installation easier. Once data has been recorded with the HOBO UX120 Thermocouple Logger, it can be viewed in graph form and analyzed using Onset’s HOBOware® Pro software.

Plugged In: New Horizons for Beneficial Electrification in Higher Education