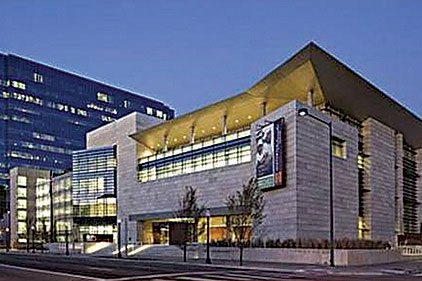 Established in 1879, just three years after Colorado became a state, the Colorado Historical Society had long served as the state’s memory keeper, occupying a number of buildings over the course of its 133-yr history. By 2008, the society sought both a new home and an opportunity to reinvent itself for audiences of the 21st century. Changing its name to History Colorado, the organization began a monumental effort to imagine a new headquarters and a groundbreaking history museum in Denver’s Golden Triangle Museum District. In April 2012, the stunning 200,000-sq-ft, $110 million History Colorado Center opened to the public with new exhibits and programs, blending artifacts, environments, media, and technology in immersive environments to showcase Colorado’s colorful stories.

DARING TO CAPTURE THE MAJESTIC AND MEMORABLE

It seemed fitting to design a remarkable building with exhibitions that would dare to capture the beauty and drama of America’s eighth largest state. Designed by Colorado architect David Tryba of Tryba Architects, Denver, the History Colorado Center’s architecture is meant to be as monumental as the museum’s ambitions, with expectations for LEED® Gold certification, a high honor for a structure of this size.

The center’s high-tech and hands-on exhibits include multimedia programs, state-of-the-art technological displays, a media wall with 132 interlocking LCD screens showing a 10,000-yr history of Colorado, a research center, and archival storage for more than 15 million items including more than 750,000 photographs and 200,000 artifacts.

These systems could not fail. A cooling failure in any one of these centers would have a disastrous impact not only on the loss of historical data, communications, and security systems, but also on the function of all the sophisticated museum exhibits — the large display screen in the grand atrium, amplifiers, DVD players, and the entire network of sound and lighting controls throughout the building.

MKK specified that the cooling system for these eight vital stations be separate from the large VAV mechanical systems that would cool and heat the museum’s offices, conference rooms and exhibit, presentation, and common areas.

Doug Crowell, chief building engineer said, “It is critical to have the controls for these nerve center systems be entirely separate from the control systems of the rest of the building. If the main VAV system fails, the IT, electrical and AV rooms will not be impacted. In fact, to be really secure, we maintain a constant temperature of 67°F in all these eight centers.”

The eight crucial nerve systems in the History Colorado Center needed to have reliable temperature control when Rocky Mountain temperatures dipped below 0°, as they often do. Charles Landherr, commercial area sales manager for Mitsubishi Electric Cooling & Heating (Mitsubishi Electric), urged Watts and his design team to consider specifying a VRF zoning system from Mitsubishi Electric equipped with a Low Ambient Cooling Kit, which guarantees cooling operation down to -10°.

Chris Zalinger, History Colorado Center project manager for RK Mechanical in Denver, explained that a common challenge with providing cooling for server rooms and electrical closets is that they are often spread throughout the building, as was the case with the History Colorado Center. “Because of Mitsubishi Electric VRF systems’ flexibility and extremely long line lengths, designers can now combine these rooms on one system. This approach helps save on installation costs by reducing the amount of equipment, electrical wiring and piping on a project.”

MKK agreed. “It made better sense to specify Mitsubishi Electric’s VRF zoning system because it can serve up to 50 indoor units with one outdoor unit, greatly reducing the number of condensing units on the roof. This leads to a reduction of electrical connections and roof penetrations.”

Operating an air cooled A/C system in cold weather — when the condensing unit is installed outdoors — presents a unique set of problems that must be overcome for the system to operate reliably over a wide range of weather conditions. One of the more important problems is maintaining adequate system head pressure due to reduction in temperature and uncontrollable winds blowing on the outdoor compressor.

The Low Ambient Cooling Kit from Mitsubishi Electric includes rear and side wind deflectors and a hood with damper controls. The kit features an outside air sensor that controls the damper position on the hood. When the outside air temperature drops below 23°, the dampers will begin to close in pre-programmed increments, lowering airflow through the outdoor unit. The colder it gets, the more the dampers close, allowing reliable cooling operation down to subzero temperatures.

Added Zalinger, “Mitsubishi Electric’s unique two-pipe heat recovery and heat pump systems provide unmatched flexibility to meet any building needs. With the introduction of the Low Ambient Cooling Kit, Mitsubishi Electric extended the cooling operation down to minus 10°. This is unquestionably a beneficial technology for use with small data centers and electrical closets that generate a constant heat load.”