Emerson Climate Technologies, Inc. has introduced the new Copeland ScrollTM condensing unit – FFAP Series, which delivers an improved energy efficiency rating (EER) of up to 15% when compared to standard reciprocating condensing units. The FFAP Series utilizes the new Copeland ScrollTM ZSKA refrigeration compressor (1.5 to 5 hp) and is compatible with a variety of refrigerants, including R-404A, R-134a, R-407C, and R-22. It also has a wide operating range (from -30°F to 45° evaporator temperature), which allows it to be used with applications ranging from floral shops to convenience stores to other retail establishments.  With the ability to be utilized with multiple refrigerants in multiple temperature applications, the FFAP Series condensing unit enables fewer SKUs to be stocked and serviced.

“Within the past few years, industry standards and government regulations for higher energy efficiency have 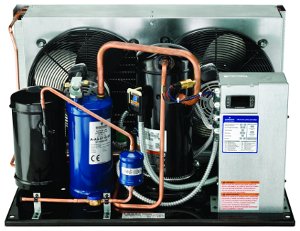