The Cheatham County School District saves $120,000 to $150,000 by reworking fire equipment already in the building. 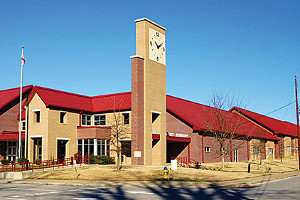 The district had reached a point where replacement parts for its assortment of older conventional and addressable fire alarm systems were hard to come by, and servicing was shoddy at best.

“There was so much frustration,” confirms Joey Dority, maintenance director, Cheatham County Schools. “It was a very bad situation before Fire-Lite came in.”

While searching to replace only its facility’s fire alarm control panels, the district’s biggest priority was finding a non-proprietary system, since they had no interest in being tied to one contractor.

“We wanted something that no matter who, what, when, or where, they could work on the system at the drop of a hat. That was the biggest selling point with the new systems,” relates Dority.

Beyond Fire-Lite’s non-proprietary nature, the district was thrilled to learn the existing wiring could be re-used, making it affordable for Cheatham to fully replace all devices (smoke detectors, pull stations, horns, strobes, etc.) in each school as well.

“By re-using the wire in all 12 schools, we probably saved between $120,000 and $150,000 dollars,” explains Mike White, account executive for Interactive Systems of Nashville, Tenn., the systems installer.

“In fact,” adds Dority, “the savings we incurred was probably the number one thing that allowed us to do this project as a whole from top to bottom.”

Utilizing a mix of addressable fire alarm control panels from Fire-Lite, Interactive Systems was able to scale the systems to the size and needs of each facility. Altogether, nine MS-9200UDLS, two MS-9600UDLS, and one MS-9050UD panels were installed.

As for the new devices, a mix of pull stations, smoke detectors, and heat detectors were deployed, with 75 of these initiating devices needed for each elementary school and nearly 200 for the middle and high school facilities. The 12 schools are also covered by a full scope of new notification appliances, including strobes, horn/strobes, and speaker/strobes.

“It was a pretty straightforward swap out, part for part,” relates White. “It was simple to program and very understandable, not to mention the fact that it’s a very rugged and reliable system.”

Cheatham was also pleased with the speed of the installation.

“We did all 12 schools in just 10 weeks,” reports Dority. “We were done in next to no time, and each building was only down for four days at the most.”

So far, the schools have found the new system incredibly simple to use. Service calls have decreased from two or three a week to maybe one per month for mostly non-system related issues, such as a student hitting a horn/strobe with a ball.

“If a principal calls and tells me there is an issue, they already have an idea of what’s going on before I get on-site. Sometimes we can even solve the issue over the phone,” says Dority.

Likewise, the maintenance staff can easily reset the pull stations with a key, as opposed to tracking down a specialized Allen wrench or other tool.

In the near future, Cheatham County plans to either expand a current facility or build a new high school and Fire-Lite systems appear to be their undisputed choice for fire protection.

“We will be sticking with the Fire-Lite panels not only for the sake of standardization, but it’s been such a good deal so far,” relates Dority.