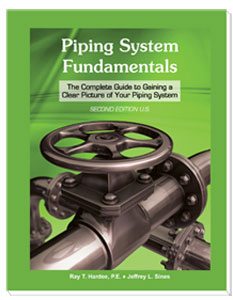 The company’s second edition of its Piping System Fundamentals book is now available in metric.

The U.S. version of the book, released earlier this year, includes a pdf preview of the book available here.

In addition to content changes, the publisher completely reformatted all the images and tables to achieve a more consistent look throughout. A new cover design, and special supplementary software has been added to the second edition.

“This metric translation is particularly important because of the example piping systems included on the accompanying software CD, are all designed using the metric system. The disk includes more than 30 example systems described in the book.” Said Jeffrey Sines, Training Lead at Engineered Software, Inc. “The rearrangement of many of the sections will make the book follow a more logical path to understanding how piping systems function.”

“The metric translation of the Piping System Fundamentals comes right on time,” said Hardee, who noted, “we have some very large overseas classes being arranged, and I am pleased we will be including the updated Metric Second Edition with the instruction.”

Piping System Fundamentalssecond edition will be included in the training course offered under the same name, and will complement the recently updated content for the course. Co-Author, Sines, made major updates to the training material last year, and was the main contributor of the updates to the second edition. Sines brings over 20 years of experience in plant operations, and process engineering, as well as over 500 hours of training instruction experience.

Original author, Hardee has written a new foreword touching on the motivation behind the update and the book’s main objective. Hardee has had over 13 years in the power generation industry, and has served as the CEO and co-founder of Engineered Software for nearly 30 years. He has contributed dozens of articles and papers to various magazines and standards publications and has given over a thousand presentations on fluid piping systems around the world. Hardee is a member of the Hydraulic Institute and was most recently recognized for his contributions on the new standard, Electronic Data Exchange for Pumping Equipment, HI 50.7-2010.

Additional new features of the second edition include: