Leveraging additional workforce resources in a world where they are hard to come by allows Olson Plumbing & Heating to grow without having to find and hire additional personnel.

Perhaps the most powerful trend in commercial construction today is building information modeling (BIM). With this process, multiple trades closely collaborate around a single, 3D, digital model representing the physical spaces of a construction project.

In short, a project is initially designed and “built” virtually, on screens, so that its subsequent physical construction in the field can go more smoothly and efficiently. The payoffs from this 3D modeling are numerous, but they boil down to improved project execution through better communication and coordination among the trades.

To better appreciate the practical benefits of BIM, consider a hypothetical hospital construction project. Imagine an operating room where structural steel for beams, ductwork, lighting, and medical gases are all fighting for the same small amount of space.

BIM allows for upfront coordination among all trades to predetermine conflict and clash resolution before boots ever hit the ground. Conflict resolution may require the issuance of a request for information (RFI) to the engineers and architects to sort out the conflict and direct the team on how to proceed.

If the team can’t internally coordinate, it can sideline plumbing, mechanical, electrical, and structural teams for weeks that are waiting for a response to the RFI. If this occurring during installation, it could have a considerable impact on the schedule.

Avoiding job site clashes, like our hospital example — and the costly delays and productivity headaches they trigger — is a big reason why Olson Plumbing & Heating Co. enthusiastically incorporated BIM several years ago, according to project manager Lana Marsh. The Colorado Springs-based contractor, whose origins go back to 1917, currently pursues a range of commercial projects with health care, hospitals, and schools among its specialties.

“BIM is used routinely throughout our Colorado markets,” said Marsh. “We use it on the big projects, for sure, and while smaller remodels lend themselves less to this process, even here we can still use BIM and find value.”

Olson has done jobs for which it was the prime decision-maker on whether to use BIM, she continued.

“But, typically, the general contractor sets the level of expectations regarding the range of piping diameters our 3D model will show, and how detailed it and the drawings generated from it must be," said Marsh.

Among BIMs attractions for Olson is the way it facilitates prefabrication as an alternative to job site installation. The more prefab on a project, the better, according to Marsh. Why? A fab shop is, by definition, a more controlled work environment than a job site. External and environmental factors, multiple trades, and factors outside of company control give the job site many additional safety concerns.

“A fab shop gives us more control over safety factors and allows us to monitor work quality on a tabletop or pipe stand rather than in the dirt,” said Marsh.

Just as important, prefab allows Olson to plan and work ahead.

“It helps us keep pace with all the demanding project schedules being pushed right now,” she said. “We would struggle to keep up if all of our install work had to take place in the field.”

BIM’s 3D modeling and the different types of digital drawings it produces also help Olson anticipate problems — such as those mentioned in the hospital example — before they become job site emergencies.

“The drawings produced through the BIM coordination process identify issues before we ever put a shovel in the ground,” Marsh said. “We can get the engineer's input early in the process without holding up the job for weeks, trying to get answers. Of course, we don’t catch everything up front, but we do catch a lot.”

Olson Plumbing & Heating is committed to BIM as a business model. Currently, the company has a three-person CAD department under the direction of manager Chris Becker to manage its modeling processes. With this type of skilled labor being extremely hard to find right now, it's difficult to develop more extensive in-house capabilities and resources.

“We are family owned and operated and relatively small as compared with other plumbing and mechanical contractors in our area,” said Marsh.

Given its resource constraints, Olson would likely find it difficult to maintain a large CAD department. This type of highly skilled, technical professional who understands local codes, standards, and construction practices, in addition to the numerous technology aspects of the various software programs involved in 3D modeling, is a challenge to find and recruit.

“If we were to ramp up for a particular project, we would likely need to hire around 15 skilled professionals, and that's assuming we could find that many in the current labor market," said Marsh. “Once the work was done on that job, we might need to lay off most of them because we didn't yet have the next project ready for them to work on.”

In July 2020, the opportunity arose to bid on a new $60 million construction project 45 miles south of Colorado Springs in Pueblo: A new, two-story, 185,000-square-foot high school to replace the existing Centennial High School. Olson was awarded not only all the plumbing work but also the variable refrigerant flow (VRF) system and refrigerant lines. Given the magnitude and complexity of this sprawling, state-of-the-art structure, Olson’s CAD department recommended recruiting a relatively new entity in the BIM arena, Uponor BIM Services, to help coordinate the project.

Why Uponor? Becker enjoys a close working relationship with the Apple Valley, Minnesota-based manufacturer, as well as with its local sales agent TM Sales and Denver distributor Wholesale Specialties. Not surprisingly, these relationships grew stronger in recent years through partnerships on various commercial projects that involved the manufacturer’s PEX pipe and fittings. However, the massive Centennial project brought a different twist: not a coil of PEX was specified for the project. “Uponor helped us design and successfully install previous PEX plumbing systems,” said Marsh. “When Centennial came up, Uponor told us it was launching a new BIM services group and asked if we would be interested in utilizing their team.”

Olson was aware that Uponor had been actively building its 3D modeling, drafting, and detailing capabilities. The company is now fully equipped to design not just for PEX but also several other material and system types needed to support the building infrastructure, including plumbing and mechanical.

“We felt Centennial would be a really good project for Uponor, given our own emphasis on prefabrication,” said Marsh. “In the past, we’ve had outside sources do some project modeling and draw some product assemblies for us but never with spooling and dimensioning. With Uponor, we had a professional third party that could take its modeling and drawing to full fabrication-level detailing.” 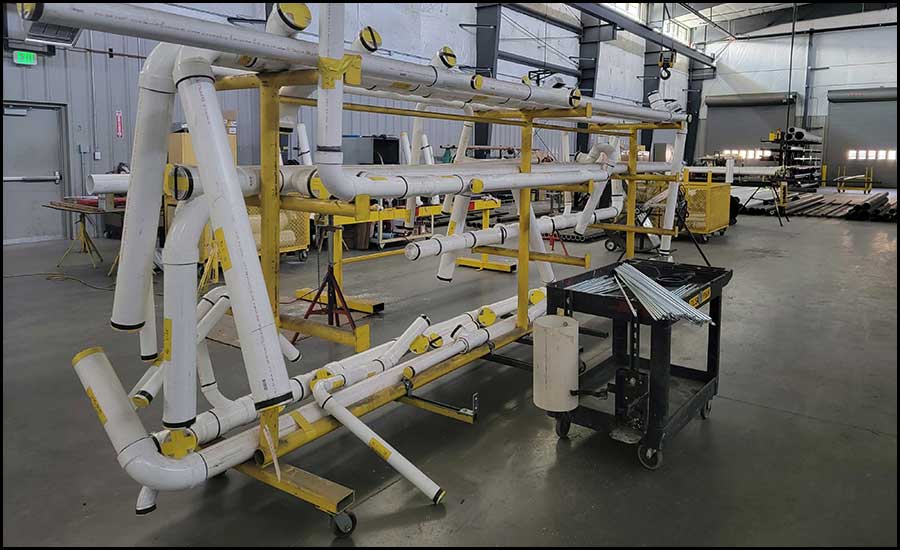 Using a digital model provided by project architect MOA Architecture, Uponor BIM Services populated it with all the pipe, fittings, equipment, and other products specified at Centennial. As a virtual representation of the actual facility, the 3D model incorporates mechanical systems plus architectural, civil, and structural elements, and more. Considered a shared resource by all the main trades on a project, the model is where coordination occurs to achieve a building’s coordinated layout and design.

Starting their work shortly after the groundbreaking in early spring 2021, the Olson and Uponor BIM teams finished modeling the first of the building’s two levels around Oct. 1, 2021.

“Populating the digital model is just the start,” said Tim Kiepe, business development manager for Uponor BIM Services. “After the model has been converted to fabrication content, we move into the coordination phase. This phase is a delicate dance between all the trades vying for their respective spaces on the job while also adhering to all owner requirements.”

Here is where potential clashes and collisions — one contractor’s ductwork running into another’s drain, waste, and vent (DWV) stack or conduit — are discovered and resolved before becoming actual job site problems.

“It is also where the original system layout can be altered to gain welcome efficiencies wherever we can create them in a way that is acceptable to the specifying engineer,” added Marsh.

At Centennial, one such change was a request to Uponor BIM Services to raise an underground plumbing drainage line several feet. Doing so would spare Olson from having to dig a deeper trench, saving labor as well as earth-moving equipment rental costs. A second efficiency gained was to eliminate several offsets in the piping layout. Straighter pipe runs result in fewer pipe connections, which is another time- and money-saver.

“When you are 3D modeling pipe runs, you can recognize that sort of problem and then optimize the pipe’s path,” said Marsh. “Not having to dig an extra 3-4 feet saves us a ton of work in the field.”

Once these clash-detection issues have been resolved, the next step is to generate various types of drawings to guide the fabrication and installation work to come:

“I have seen where utilizing this hanger process can save the installing contractor tens of thousands of dollars in labor and help them stay ahead of the aggressive construction schedules,” said Kiepe. 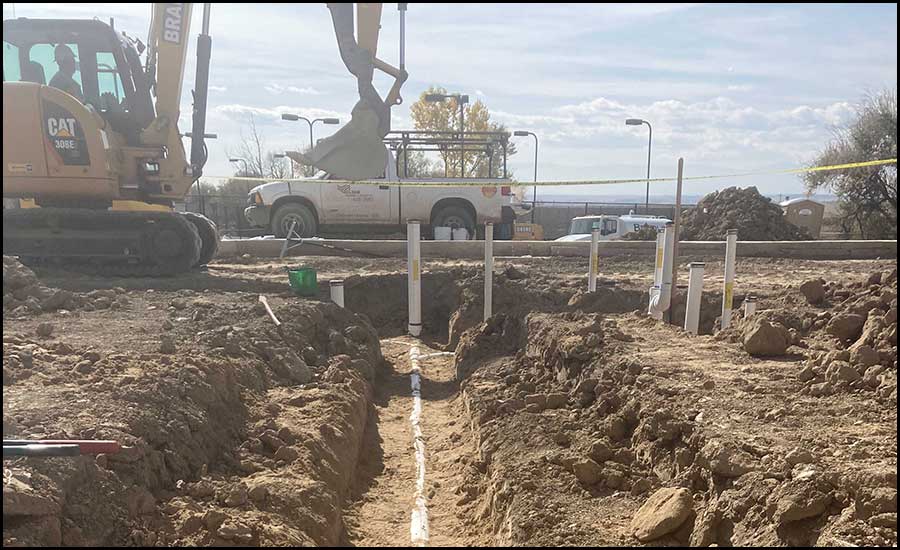 FIGURE 3. Underground PVC drainage pipe — 6-inch trunks with 2-, 3-, and 4-inch branches — is installed in 20-foot, premade sections into the graded ditch, so that the lengths can be quickly connected.

Coordinating All the Trades

We have already seen how BIM identifies and helps resolve job site conflicts before they happen. Just as important is the way it enhances coordination and communication between the general contractor and the various trades on a project — and among the trades themselves. Large commercial construction projects routinely entail numerous meetings to ensure everyone’s on the same page. On a BIM project, that process becomes easier with the 3D model at the center of all those conversations.

On the Centennial project, Olson and Uponor meet once per week to sort through key issues. The two also coordinate weekly with the sheet metal and fire-protection subcontractor, “breaking down the job almost pipe length by pipe length, ductwork piece by ductwork piece, to avoid collisions on the job site,” said Kiepe.

The objective of these sessions: to keep the project moving forward while maximizing the time of the entire project team during the weekly coordination meeting held by the general contractor.

“We will meet as often as necessary to get everyone coordinated,” said Marsh. "At Centennial, we must be in sync with all these different trades — structural steel, utility, electrical, fire sprinklers — communicating through the model to build a structure in a picture before we do the work on the job site. You want to have things all worked out, so when our guys hit the job site, they can just install it and go.” 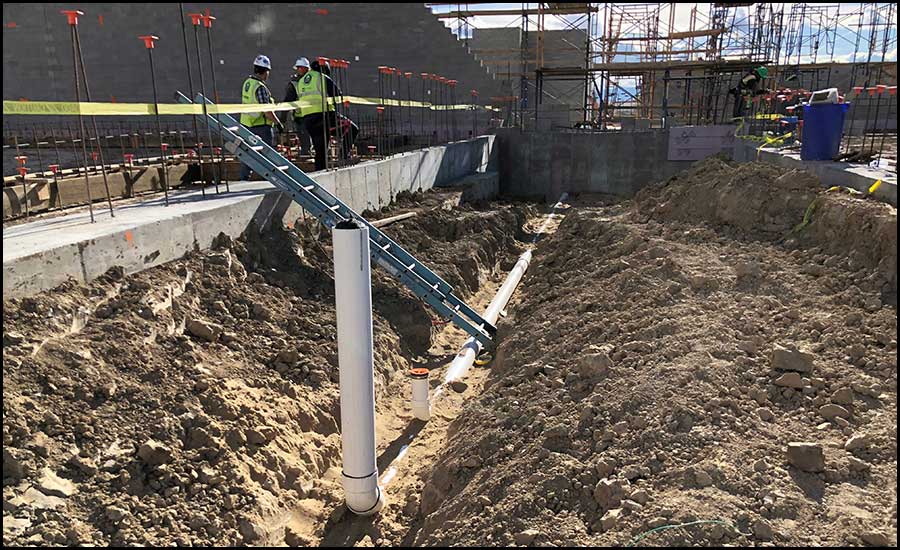 FIGURE 4. Underground PVC drainage pipe with a riser that will rise above the concrete slab and connect to overhead systems.
KEYWORDS: BIM contractors plumbing Uponor

John O’Reilly is the principal at GreenHouse Digital + PR. He has 46 years in the industry, 23 years as a marketing communications professional, and 23 years as a trade magazine editor. Contact him at john@greenhousedigitalpr.com.