The new $12 million Wasilla (Alaska) Police Station employs many innovative HVAC designs that will save the city energy and provide occupants with exceptional IAQ.

The ERVs were specified without defrost coils, which are commonly used for Alaska’s frigid winters but are costly in terms of upfront capital as well as operational and maintenance costs. Instead, DN Series DOAS units, manufactured by RenewAire, use static-plate enthalpy cores. The units are designed to operate down to minus 10°F ambient temperatures without requiring defrost cycles, because they don’t transfer H2O between supply and exhaust air. If temperatures drop lower (Wasilla temperatures rarely drop below minus 20°), the DN-Series’ onboard controller activates a bypass damper and introduces space heat to prevent heat exchanger frost accumulation, if needed, according to Christian Dougherty, P.E., mechanical engineer, AMC Engineers, which served as the project’s manager.

“The energy recovered by the DOAS units, and the fact they don’t require conventional defrost cycles and equipment, is saving the city a large amount of money,” said Dougherty, whose firm has specified core-based units on previous projects. “We’ve had mixed results in the past with energy recovery alternatives, such as enthalpy wheels, that require defrost cycles and maintenance for moving parts that cores don’t require.”

“Cores aren’t subject to cross-contamination, which is potentially problematic in critical spaces, such as garages and evidence rooms, where contaminants can potentially infiltrate occupied spaces,” said Jordan Privoznik, systems sales leader at Trane. “DOAS units with static-plate cores are often ideal solutions in our environment as they can be more reliable than other energy recovery methodologies due to less moving parts while still achieving very high efficiencies.”

Installed by Mechanical Specialists Inc., the project's mechanical contractor, the two DN Series ERVs provide 3,000- and 1,700-cfm of 100% outdoor air in the facility’s 3,100-square-foot garage and 750-square-foot evidence room, respectively. Both spaces are under negative pressure to prevent garage vehicle emissions and evidence room odors, such as bodily fluids or confiscated drug off-gassing from infiltrating common walls shared with occupied spaces. The two units are also outfitted with sensors, an onboard controller, a manual wall switch, and a smoke detector — the latter which complies with Alaska building code. The facility’s building management system (BMS), a Trane Tracer Control System, monitors the ERVs. 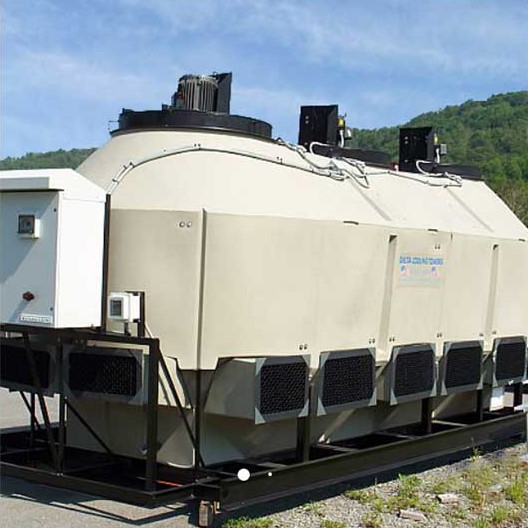 FIGURE 1: The evidence room dedicated outdoor air systems are shown in the foreground, and the vehicle staging area is pictured in the background.

While evidence material off-gassing was the prime motivation, 100% outdoor air will also dilute any airborne contaminants that could degrade stored evidence. The evidence room is also closely monitored to minimize any potential degradations from wide temperature and humidity variances.

The garage’s 100% outdoor air is critical in preventing CO and NO2 accumulation and maintaining IAQ for employees using and servicing city vehicles. The ERV uses energy recovery to help maintain a year-round 70° set point. On extreme cold days, which according to ASHRAE guidelines is minus 23° locally, the ERV can preheat air to as high as 40°. A 70°F leaving air temperature can be reached on extreme days by using the integral hydronic reheat coil supplied by the boiler circuit’s glycol heat exchanger.

Additional efficiency was created by a Dougherty and Privoznik collaboration that configured the radiant floor heating into zones (rooms) controlled by the Trane BACnet building automation system (BAS). While VAVs and radiant heating can operate concurrently, there exists a challenge when combining VAV technology’s quicker space comfort achievement with radiant tubing embedded in a thermal mass that takes longer to react.

“Meticulous programming and strategic commissioning were required to ensure both systems operated seamlessly and synergistically,” said Privoznik. “This process, combined with Trane’s advanced Trim and Respond control strategies, as prescribed in ASHRAE Guideline 36, allowed us to maximize energy efficiency, maintain control stability, and achieve optimal space comfort for the occupants.”

Another energy-efficient design was Dougherty’s collaboration with Trane for designating one air handler for operation only during standard business hours, while the other unit operates for 24/7 occupied areas. When a large portion of the building is unoccupied, and outdoor air isn’t required, the less-efficient VAV system is disabled, and space temperature is maintained solely through radiant floor heating.

Although the project didn’t apply for Leadership in Energy and Environmental Design (LEED) certification, Dougherty said the HVAC design would have significantly helped the building accumulate enough credits if the city had chosen to pursue certification.

Regardless, the police station is delivering 21st-century comfort, IAQ, and energy savings within a strict construction budget.