As power was not to be exported to the grid, engineers determined the optimum arrangement was to install two gas turbines from Solar Turbines, each with its own heat recovery steam generator.

A site assessment and engineering study recently indicated that the energy infrastructure of a university in the Northeast U.S. was ready for a major overhaul. Its 1.5-MW gas turbine had become a maintenance headache, and replacement parts were increasingly difficult to obtain. Additionally, the condensate return line of the steam system leaked badly, and its absorption chillers were near the end of their lives. Meanwhile, the underground electric distribution line (utility-owned) of this 250-acre campus had become a bottleneck. Almost at capacity and with college enrollment and its power load growing rapidly, only 4.16 kV was available for about three dozen buildings that added up to 2 million square feet of conditioned floor space.

After completing a site assessment and engineering study, the university built a new combined heat and power (CHP) plant for on-site generation and upgraded its boilers. Additionally, administrators approved the installation of a central chiller plant to satisfy the school’s growing energy needs; minimize pollutant emissions; and reduce the cost of electricity, steam, and chilled water.

The upgrade began on the electrical side. In addition to a new utility 69-kV substation nearby, two 69/12.4-kV transformers owned by the college can feed 12.4 kV to its existing south substation for distribution to the campus. A further substation was built and fed by about 5 MW from two gas turbines from Solar Turbines for on-site generation. This enables the campus to continue operation in the event of a grid disturbance and operate in island mode. As part of the project, a demand-side load-reduction program helped engineers and specifiers to optimize the heating/cooling system and upgrade campus lighting. 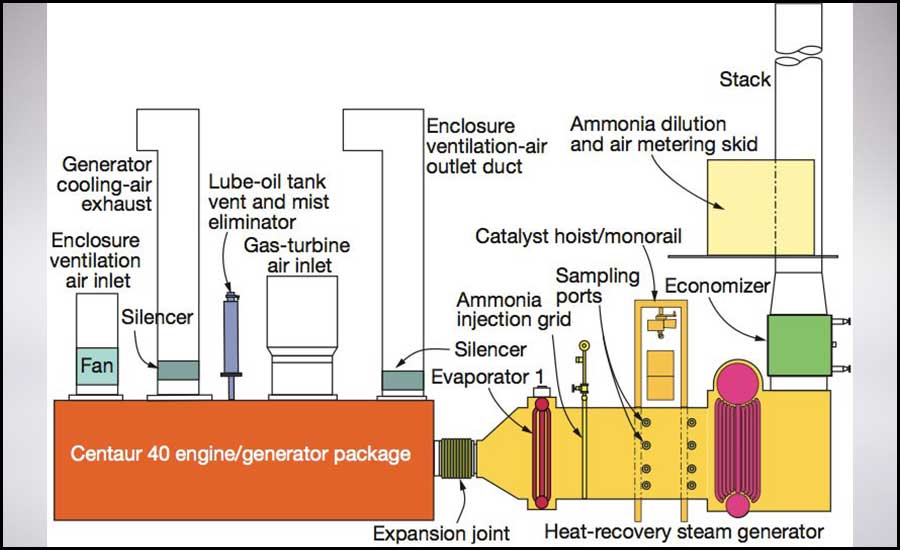 Figure 2. The basic configuration of the CHP featuring a Centaur 40 gas turbine from Solar Turbines and an HRSG from Rentech.

Air is served to each building at a specific temperature and humidity range. The main electric chillers are each capable of chilling about 2,000 gpm to between 42° and 54°F with an energy requirement of 0.63 kW/ton. The steam turbine-driven unit can operate at loads as low as 200 ton. It chills about 4,700 gpm to between 42° and 54° at full load and consumes 10.5 lbs./hr. of steam per ton. Two chilled-water loops operate year-round. One is 1,400 feet, and the other is 2,000 feet. Water at 45° is delivered to heat exchangers installed in most buildings. Hot water is used to regulate air temperature and humidity at the variable air volume (VAV) boxes (one per thermostat).

A design assessment matched the thermal requirements of the campus to its energy load. As power was not to be exported to the grid, engineers determined the optimum arrangement was to install two solar gas turbines, each with its own heat recovery steam generator (HRSG). The Saturn 20 package from Solar Turbines (1.2 MW) came with a lube-oil system and a controls package. This single-shaft unit feeds waste heat to an HRSG from Rentech Boiler Systems. Its 150-psig steam loop operates 24/7 and serves the HVAC system, the steam-turbine-driven chiller, and the domestic hot water system.

Having two GTs was deemed the best option. This avoids the inefficiency associated with operating a larger machine at part load most of the time and enhances reliability. The Centaur is equipped with Solar Turbines’ SoLoNOx dry, low-emissions combustion system. Both GTs can burn natural gas and distillate. Natural gas is typically used due to state restrictions on the number of hours oil firing is allowed per year.

Rentech HRSGs serve each machine. The boiler serving the Saturn 20 is rated 8,300 lbs./hr. at 150 psig saturated. The HRSG for the Centaur 40 produces 19,550 lbs./hr. Both units have selective catalytic reduction (SCR) units. As part of the project, a boiler from 1960 (26,000-lbs./hr.) received some maintenance upgrades to keep it in service. Two 40,000-lbs./hr. boilers from Rentech were also installed at the facility.

The biggest construction challenge was installing the new generating assets with the existing plant in service. This was accomplished by installing the Centaur 40 in the new chiller building along with its HRSG, then removing the old gas turbine and its HRSG from the original building to make room to add the Saturn 20 and HRSG. Now completed, this project provides the campus with greatly reduced energy costs. Steam and chilled water costs, too, are considerably less. It comfortably serves the growing energy needs of the university. These upgrades also helped the facility reduce emissions in keeping with state and federal regulations.

Harry Kumpula is the director of marketing for Rentech Boiler Systems.