Laying the Foundation for A2L Adoption

Evaluating the current and future role of A2Ls in commercial refrigeration.

The emerging role of A2L refrigerants in commercial refrigeration applications is a topic of spirited conversation among industry stakeholders. As the transition from high-global warming potential (GWP) hydrofluorocarbon (HFC) refrigerants to lower-GWP alternatives continues, A2L refrigerants are among the many likely options under consideration.

Classified as “mildly flammable,” A2Ls are currently approved for use and deployed in commercial refrigeration applications in Europe and other global regions — where they have proven to be both operationally safe and environmentally friendly. These installations have piqued the interest of food retailers in the U.S., who seek to comply with regulatory mandates and/or meet sustainability initiatives. 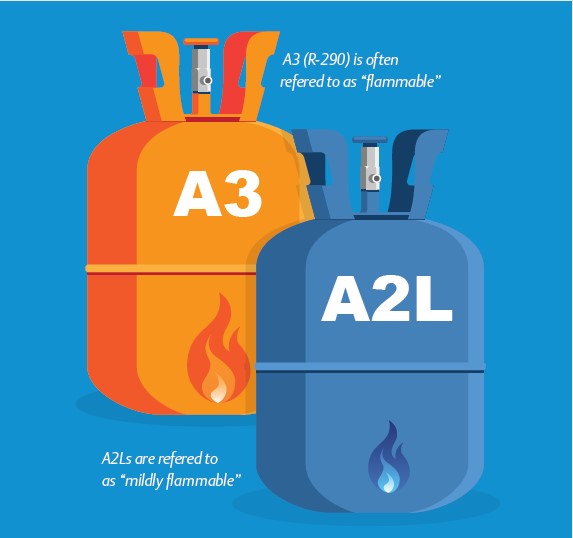 But, in the U.S., regulatory bodies are still in the process of establishing a framework for A2L use:

Today, installing an A2L-based refrigeration strategy would require the approval of local authorities having jurisdiction (AHJ), such as fire marshals and/or building inspectors.

But, in many ways, the precedent for the use of flammable refrigerants in the U.S. has already been set with propane (or R-290). This highly flammable natural refrigerant is commonly used in lower-charge, distributed applications, such as self-contained, stand-alone units and display cases. R-290 has long history of use in commercial refrigeration and is considered a known commodity.

In contrast, even though A2Ls have a lower flame propagation potential and are available in low-GWP options below 150 GWP, they are still relatively new and considered untested within U.S. food retail applications. But that may soon change.

Environmental regulations — The regulatory climate is quickly changing in the U.S., including recent developments that may expedite the use and approval of A2Ls in commercial refrigeration. In California, the California Air Resources Board (CARB) has proposed a 150-GWP limit for new refrigeration systems containing more than 50 pounds of refrigerant starting in 2022. A2Ls are among the few refrigerant alternatives capable of meeting this low-GWP threshold.

However, the passing of the American Innovation and Manufacturing (AIM) Act has brought the HFC phasedown back into focus on a federal level. The AIM Act aligns with the HFC production and consumption phasedown schedules set forth by the Kigali Amendment to the Montreal Protocol. It also authorizes the EPA to phase down HFCs through sector-based controls, address service requirements, and continue approving refrigerants via its Significant New Alternatives Policy (SNAP) program. This will likely include guidance on the use of A2Ls.

From a broader industry standpoint, the hope is that the AIM ACT will bring much-needed regulatory uniformity across the nation. The EPA is currently accepting and evaluating stakeholder input to help them define the framework of their initial proposals.

Comparing the Flammability Characteristics of A2Ls and A3s

Understanding the flammability characteristics of A2L and A3 (R-290) refrigerants is important when evaluating their safety considerations, relative risks, and guidance set forth by safety standards. We often refer to R-290 as “flammable” and A2Ls as “mildly flammable.” But, relatively speaking, what do these classifications mean? This can be easily demonstrated by using the following key flammability metrics:

Safety standards — To ensure the safe use of A2L (and A3 refrigerants) in commercial refrigeration equipment in North America, governing bodies are making changes to safety standards and building codes that oversee A2L and A3 equipment design and application.

In a 2019 update, the International Electrotechnical Commission (IEC) raised the allowable charge limit for A2L refrigerants to 1.2 kg (2.6 lbs) in new equipment; R-290 charges were raised to 494 g (1.1 lbs). Since then, Underwriters Laboratory (UL) and Canadian Standards Association (CSA) have been working together to evaluate a proportionate increase in charge limits for flammable refrigerants in the North American version of the standard, aka UL/CSA 60335-2-89.

On the application side of the safety standard equation, ASHRAE 15 is also being updated via Addendum L, which would allow for the expanded use of flammable refrigerants in commercial refrigeration applications. This update is in accordance with the proposed equipment design standard in UL/CSA 60335-2-89 and relies on already established principles set forth in Addenda D and H established for air conditioning applications.

In effect, the proposed ASHRAE 15 update would apply to A2L, A2, and A3 refrigerants used in self-contained equipment and would allow for the use of A2Ls in field-erected systems.

Industry stakeholders are currently working to harmonize the UL/CSA 60335-2-89 proposal with the ASHRAE 15 update. Once approved, it may take several years to become adopted among state and local building codes. In other words, even when safety standards are finalized, industry may still have to wait a few years before A2Ls are more widely adopted.

In Europe, where A2Ls are already approved for use, some retailers have made them the basis of their refrigeration strategies. ASDA, a food retailer in the U.K., was recently recognized as the first retailer to adopt an all-A2L refrigeration architecture.

ASDA based its new A2L-based refrigeration design standard on existing data from the use of R-290 — even though A2L flammability levels are well below those of R-290 (see sidebar).

As of 2019, ASDA had transitioned all its stores from a centralized, HFC-based architecture to a distributed approach that utilized lower charges of the A2L R-454A. While R-454A does not have the lowest GWP of available A2L alternatives (239 GWP), it helped ASDA to meet its sustainability goals, comply with the EU’s F-Gas regulatory requirement, and achieve desired refrigeration performance improvements.

Lowering refrigerant charges and moving to a distributed, remote system design also helped ASDA to achieve one of its primary safety objectives: to limit the potential for refrigerant leaks. Preventing leaks not only minimizes safety risks but also ensures that systems are operating at full capacity and efficiency.

Their A2L display cases are equipped with a modular leak-detection alarm system integrated into the case controller. If leaks are detected, the system activates an alarm that triggers a shut-off valve, which stops refrigerant flow. In addition, leak thresholds are set at a very low level to limit the potential for A2L ignition.

As part of its transition strategy, ASDA first upgraded its older HFC cases with newer A2L-rated versions, laying the groundwork for when each store would decommission its HFC centralized system and transition to the A2L distributed refrigeration plants. This strategy serves as a potential example for how U.S. retailers might make a similar refrigerant transition in their stores.

As environmental regulations evolve and safety standards are finalized in the U.S., A2Ls will become another option for achieving low-GWP refrigeration. However, integration into state and local building codes may take a few years.

At Emerson, we are already designing equipment that can help OEMs and retailers to make the transition to lower-GWP refrigerants, including A2Ls. We are also actively participating in stakeholder meetings and working groups to help the industry finalize these regulatory proposals in hopes of achieving the most viable and sustainable solutions for commercial refrigeration.

As formulate your short- and long-term refrigerant transition strategies are formulated, Emerson will be sure to keep the industry informed of any of these regulatory developments and emerging refrigerant options. Configuring the Future of A2L Refrigerants

The Three A’s of Digital Transformation: Adaptation, Adoption, and Agility