This website requires certain cookies to work and uses other cookies to help you have the best experience. By visiting this website, certain cookies have already been set, which you may delete and block. By closing this message or continuing to use our site, you agree to the use of cookies. Visit our updated privacy and cookie policy to learn more.
Home » Implementing a Fuel Oil System for a Hospital’s Large-Scale Backup Generation Needs
Health Care HVACHeating & BoilersToday's Boiler

A university hospital was adding a wing to its complex, but the size of the wing was sure to pose a challenge to the local electric utility. The electrical consumption of this new construction project was predicted to be so high that it would overtax the utility, putting it into a “low reserve” status, particularly on hot summer days. This was not viable for the utility, so the planners came together to devise a solution.

The utility offered the hospital a substantial discount on its electricity if it would install a backup generator system, allowing the hospital to go off the grid during periods of high consumption. This was an acceptable resolution for everyone involved, so the hospital brought in Preferred Utilities Manufacturing to help design the system. Bringing in a company with expertise in fuel systems early in the process like this worked well because it allowed everyone to have input in creating a solution that is reliable, robust, and redundant.

“Getting involved early in the design process really is ideal when a customer needs a major fueling system,” said Don Hay, senior service engineer, Preferred Utilities Manufacturing Corp. “Everyone involved in the project might have different priorities and needs, so it allows us to design the system in consultation with everyone involved. As a result, it saves a lot of time and money in the long run.”

The generator building that was constructed consists of eight 3-MW Caterpillar generators with diesel exhaust fluid (DEF) systems along with two 20,000-gallon, above-ground storage tanks. Preferred supplied two duplex pump sets, each to service four of the generators, and they can pull from either main storage tank. They also supplied eight 620-gallon day tanks, a filtration system that can polish either main fuel tank, and the controls for the generator DEF supply system.

Most of the fuel oil system devices are part of the generator day tanks. These 620-gallon day tanks provide about two-and-a-half hours of full-load fuel to their local generator. Each day tank includes a PLS-5 float switch assembly, a separate high-level switch, a vent switch, a flow manifold, and a return pump. All the wiring for these devices was completed and tested at the Preferred factory, and when the day tanks were started up in the field, no wiring errors were found. The only thing that needed to be repaired was one faulty vent line switch that appeared to have been damaged in shipping. Having all the tanks work right out of the box cut startup time substantially.

Preferred also created a custom operation for this application. The company’s engineer requested flow switches in the day tank fill manifolds as well as return pump piping, so, whenever a day tank was calling for fuel, the local touchscreen would indicate that fuel was going into the day tank. This was possible because all the control panels were connected via nodenet. The same was true of the return pumps. The flow switches proved flow, and operators could get visual confirmation from any touchscreen.

The ATPSF-207 pump set includes a new telecommunication-style NEMA 3R weatherproof enclosure. These enclosures keep the pump sets cool, dry, and bug-free in any weather. They also provide a shade so the touchscreen can be seen in bright daylight conditions. The 1,200-GPH fuel-polishing system will ensure the university never has to worry about water, sludge, or other contaminants shutting down its generators. 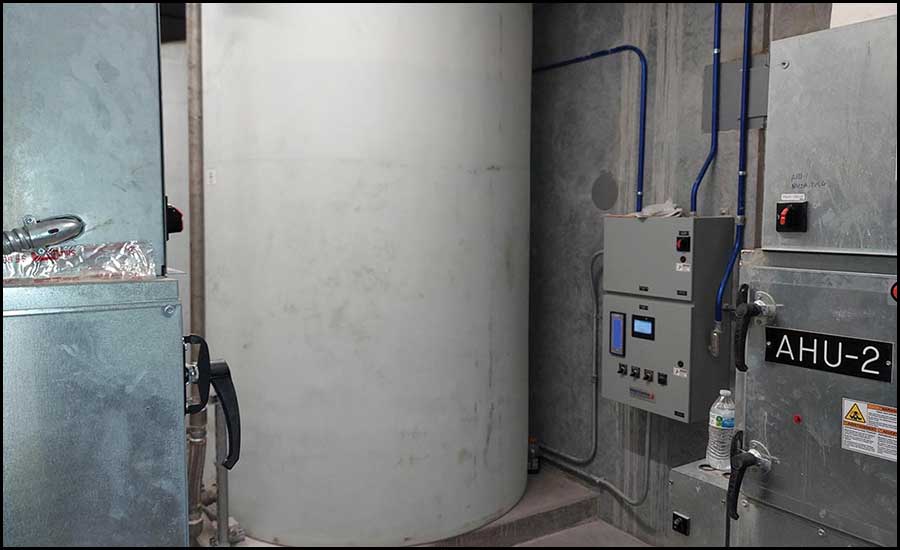 Figure 2: This is one of two 2,000-gallon DEF tanks, with the control system on the right. The tanks are made out of polyurethane and include a submersible pump and magnetorestrictive level sensor.

The university hospital still has room for a third 20,000-gallon main tank if it ever decides to add more fuel storage. These main tanks include platforms and ladders that allow for easy access to the wire floats, high-level switches, and leak detectors during commissioning. These features mean the contractor does not need to climb out on the tank, which is a big plus with regard to safety. The tanks themselves are made from polyurethane and include a submersible pump and magnetorestrictive level sensor.

This fueling system was designed from the ground up to be reliable and robust. Redundancy is built into the main tanks, supply pumps, day tanks, and control system. In the event of a control failure, any pump can be used to fill day tanks, and redundant safety features are installed to prevent overfilling a main or day tank. In terms of monitoring, information related to a pump set or day tank can be seen on any of 13 touchscreens as well as on the university’s building management system and on the Preferred cloud. The fuel system is integrated into the building’s fire detection system so that it will shut down to prevent it from literally adding fuel to a fire.

The university hospital can now run at full power without electricity from the grid in the event of a utility curtailment or any weather-related or other power emergency. This kind of fuel system can serve as a template for both efficiency and safety for many types of large backup generation needs.

Is Your Hospital a Transfer Site for Antiobiotic-resistant Genes?