This website requires certain cookies to work and uses other cookies to help you have the best experience. By visiting this website, certain cookies have already been set, which you may delete and block. By closing this message or continuing to use our site, you agree to the use of cookies. Visit our updated privacy and cookie policy to learn more.
Home » The Three Stages to Controlling a Chiller and its Primary-Secondary Pumps
Building AutomationBuilding Automation ColumnCooling & ChillersPumps & Flow Controls

In general, the energy consumption of commercial HVAC systems represents a significant portion of the overall building energy consumption. Within an HVAC system, typically, the chilled water and heating hot water plants are the largest energy users and have the highest first cost. When it comes to the design of chilled water and heating hot water plants and their associated piping and pumping systems, the industry literature is exhaustive, to say the least.

One of the most typical chilled water plant pumping and piping arrangements is the primary-secondary system. As show in Figure 1, the chilled water primary-secondary system consists of two piping loops, which are separated by a common bypass pipe. The primary loop is dedicated to the chillers, and the secondary loop is dedicated to the loads in the building. One of the main reasons behind using this pumping approach is the sensitivity of the chillers to variations in the water flow through the chiller evaporator bundles. To mitigate the risk of having the chillers tripping due to insufficient flow through the evaporator, the pumps in the primary loop (i.e., PP-1 and PP-2) are sized for the design flow of the chillers and are operated at constant speed. The operation of each pump can be integrated with the operation of each chiller, or it can be staged such that any pump can be integrated with any chiller based on run time and/or fault conditions; however, and in order to prevent backflow through a chiller that is not operating, a motorized isolation valve will need to be provided for each chiller. The speed and staging of the secondary pumps (i.e., SP-1, SP-2, and SP-3) is modulated by a building automation system (BAS) to maintain a differential pressure set point in the piping system. Typically, at least one differential pressure sensor is installed at the extreme end of the piping system.

The purpose of the common bypass pipe located upstream of the secondary pump is to ensure sufficient water flow is readily available to the chillers during low-load conditions. Since the common pipe is a critical design feature in the operational safety of the chillers, appropriate sizing of the bypass is required. For instance, an oversized pipe allows the intermixing of fluids and affects chiller optimization due to varying inlet temperature, whereas an undersized bypass might fail to provide the necessary minimum flows to the chiller.

Controlling the up-staging of the chillers and the associated primary and secondary pumps needs to be done in at least three stages. In the first stage, the BAS will need to check for any faults at the standby chiller(s), pumps, and valve actuators. Once the BAS has detected there are no faults with the standby plant equipment, the BAS will then enter the second stage, open the motorized isolation valves, and turn on the standby pumps. Upon sensing proof of the required flow through each chiller, the BAS will enter the third stage and enable the standby chiller(s) to run and maintain the associated chilled water temperature set points. It is important to note that ASHRAE Guideline 36 describes in more detail various sequence of operations (SOOs) that could also be used when designing controls systems for chilled water plants. The SOOs described in this article are SOOs the authors have succefully designed and implemented on chilled water plants with a capacity ranging from 1,000-2,400 tons.

SOOs for establishing an overall design intent for the BAS programmers could be: a) The chillers are staged based on secondary chilled water system flow rate; b) When the system is enabled, the first-stage chiller shall operate; c) When the secondary system flow rate exceeds 1,500 gpm (adj) for more than 15 minutes (adj), a stage-up event shall occur, and the second-stage chiller shall be initiated as described below; d) If the second-stage chiller is operating, and the secondary chilled water system flow rate falls below 1,800 gpm (adj) for more than 15 minutes (adj), a stage-down event shall occur; e) The system shall prohibit a new stage-up or -down transition for 20 minutes (adj) after a stage-up or stage-down transition. This allows steady state to be achieved and ensures a minimum on and off time before changing stages; and f) The secondary chilled water pump staging and speed control logic shall be independent of the primary system staging sequence. 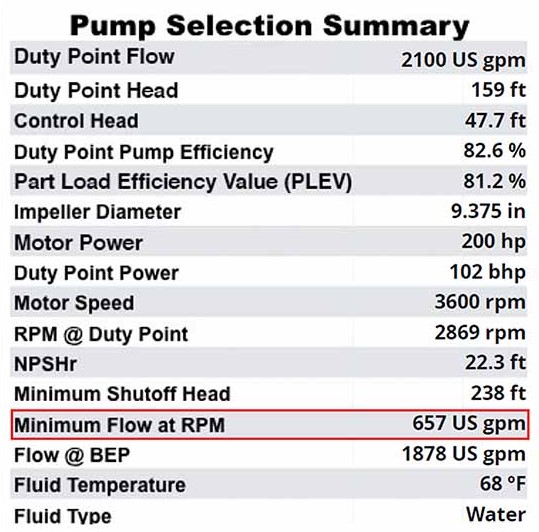 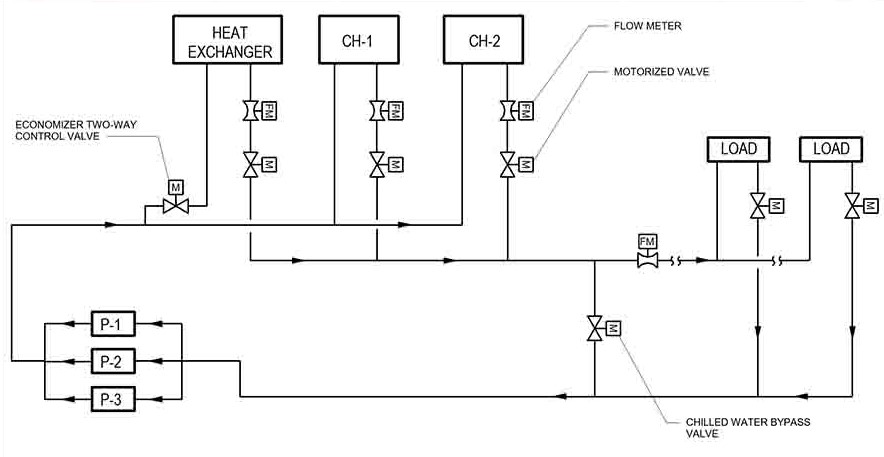 SOOs for the third stage – The BAS enables the standby chillers to run: a) Start the next-stage chiller after the associated chilled water isolation valve is fully open or after a minimum time delay as recommended by the chiller manufacturer, whichever is more. The final time delay will be determined in the field as required to prevent nuisance trips; b) Release the primary chilled water and condenser water pump speeds and modulate the first- and second-stage pumps in unison to maintain the system flow rate set point; and c) Release the first-stage chiller demand limit. 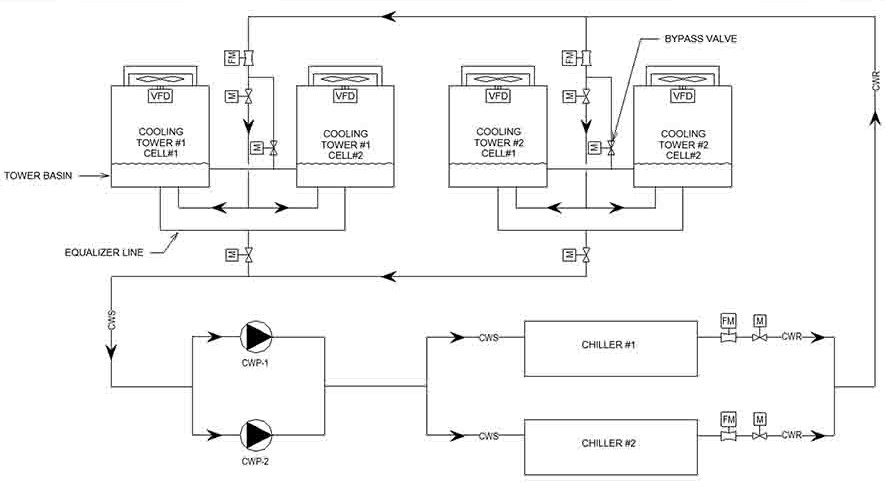 An alternative to the primary-secondary pumping and piping arrangement is the variable-primary system. As shown in Figure 3, this piping arrangement consists of only one set of pumps; the secondary pumps have been removed and the flow through the evaporator is allowed to vary. The speed of the primary pumps is now controlled to maintain the DP set points in the piping system and to maintain the minimum chilled water flow through the chillers or the minimum flow through each operating pump, whichever is higher.

A few potential pitfalls while designing condenser water systems and selecting condenser water pumps, if not avoided, could lead to catastrophic failure or damage to the system and its components. Some of these pitfalls are incorrect pump head estimation and air in pump suction, leading to cavitation.

It’s important to determine the correct pump head considering whether the tower is a closed or open loop. In a closed-loop circuit, the static head determination might not play a significant role, as the static head required to pump water to the top of the elevation is cancelled by static head regained as water flows down the return piping. Whereas, in an open-loop circuit, it’s critical to determine the tower static head because of the open height of the piping circuit. The pump head estimation calculations need to take into consideration the static head necessary to raise water from bottom to top of the cooling tower as well as incorporate any of the friction losses through piping, chiller condenser bundle, cooling tower, and valves.

Further, air into the suction line of the pump could also be drawn due to insufficient water in the tower basin, which, upon pump startup, would lead to the draining of the basin or lower its water level, leading to the formation of vortices.

Cavitation is an extremely important factor that could contribute to severe damage of condenser water pumps. Cavitation occurs when the pressure at the inlet of the pump is less than the net positive suction head (NPSH). Pump cavitation could be prevent by implementing some of the following: a) Electronic level sensors; b) Design of bypass; c) Proving flow in enabled tower prior to enabling next pump; d) Limiting suction piping positive displacement (PD); e) Placing cold water (CW) strainers on discharge side of pumps; f) Ensuring construction strainers are removed from pump suction diffusers; and e) Providing motorized isolation control valves on both sides (supply and return) of each cooling tower.

No matter how well pumps are being selected and piping is sized, if the associated controls sequences are not properly designed and implemented, then the potential of having an energy-efficient chilled water plant is significantly reduced. Lastly, having the proper BAS sensors and actuators is just as critical; one cannot properly control what one doesn’t measure. Vidit Dabhi is a mechanical engineer with SmithGroup, working primarily on workplace, health care, and federal projects in the design and analysis of HVAC systems. Mohammed Fahd is a mechanical engineer at Smithgroup, where he supports the mechanical and energy management team. His experiences include designing HVAC systems for health care, educational laboratories, and workplace sectors.

A Holistic Approach to Upgrading a Chilled Water Plant

Pushing the Boundaries: Heating a Building with a Chilled Water System