Thorough mixing of combustion air, fuel, and high volumes of flue gas is a very effective approach to almost eliminate both thermal NOx and prompt NOx.

Premixed combustion provides a simple approach to reduce thermal NOx and prompt NOx formation. In addition, it has numerous other benefits, including enhanced mixing, which can lead to reduced flame volumes and ultra-clean and complete combustion over an extreme range of excess air levels. Furthermore, the enhanced mixing and reduced flame volume, when combined with high rates of internal flue gas recirculation, can enable increased heat transfer, increased throughput, and reduced equipment life cycle costs by mitigating flame impingement on process tubes.

External flue gas recirculation (FGR) has been widely used as a NOx emission control technique, where flue gases from the exhaust stack are recirculated by means of an external blower into the boiler air intake. The challenges with using external FGR are reduced flame stability, the additional power consumption if an external blower is required, increased burner cost due to the associated piping, and a shift downstream of the heat transfer due to the increased velocity of the flue gases resulting from the increased volume.

Burners, such as novel ClearSign Core™ units, combine the benefits of premixed combustion and internal FGR to provide extremely low NOx emissions on the order of those achieved by a more complicated and costly selective catalytic reduction (SCR) system and without the use of expensive catalysts or chemicals.

In diffusion flame burners, fuel and air are transported to the reaction zone without prior mixing, and combustion occurs as the fuel and air mix in near stoichiometric conditions, resulting in peak flame temperatures close to the adiabatic flame temperature and, thereby, high thermal NOx. Further, the fuel is heated in a fuel-rich environment, which creates fuel radicals leading to prompt NOx formation. On the other hand, premixing the fuel and air to form fuel-lean mixtures avoids high-temperature stoichiometric conditions in the flame zone and prevents conditions conducive to prompt and thermal NOx formation. Increasing the amount of excess air, i.e., leaning the fuel-air mixture, can help lower the NOx even further with a burner technology devised to maintain stable combustion under such conditions.

The ClearSign Core burner incorporates a flameholder positioned downstream from the fuel-air injection plane. Fuel and air are thoroughly mixed before reaching the flameholder. In addition, the momentum of the fuel jets and the airflow are utilized to internally entrain and recirculate the flue gases. The effect is dilution of the air-fuel mixture with inert flue gases — N2, CO2, and H2O — which further lowers the flame temperature and reduces the formation of thermal NOx. The mixture is then ignited by the flame anchored at the flameholder location, where the bulk of the combustion occurs. Properly engineered mixing tubes are placed between the air/fuel injection plane and the flameholder to efficiently inspirate internal flue gases and thoroughly mix those flue gases, fuel, and combustion air. The flameholder is designed to provide flame confinement as well as enhanced radiant heat transfer to the desired surface.

The burner technology has already been successfully applied to three different applications: burners, both firetube and watertube; process heaters; and enclosed combustors.

The ClearSign Core Firetube Boiler Burner architecture, shown in Figure 1, was developed in ClearSign’s Seattle test facility in a commercially available 125-horsepower (hp), four-pass, dry-back, firetube boiler. The test boiler was instrumented to accurately measure fuel flow rates and pressures as well as temperatures at multiple locations along the inside of the firetube and in the stack. Windbox and chamber pressure were recorded using manometers, and NOx, CO, and O2 emissions were monitored using a portable Testo 350 analyzer. Measured NOx emissions were as low as sub-2-ppm NOx corrected to 3% excess O2 for this burner at full firing rate. The NOx emissions as a function of excess O2 follow a trend consistent with premix flame behavior as shown in Figure 2. The excess air dilution causes leaner fuel-air mixtures, producing lower peak flame temperatures and, hence, lower NOx emissions. 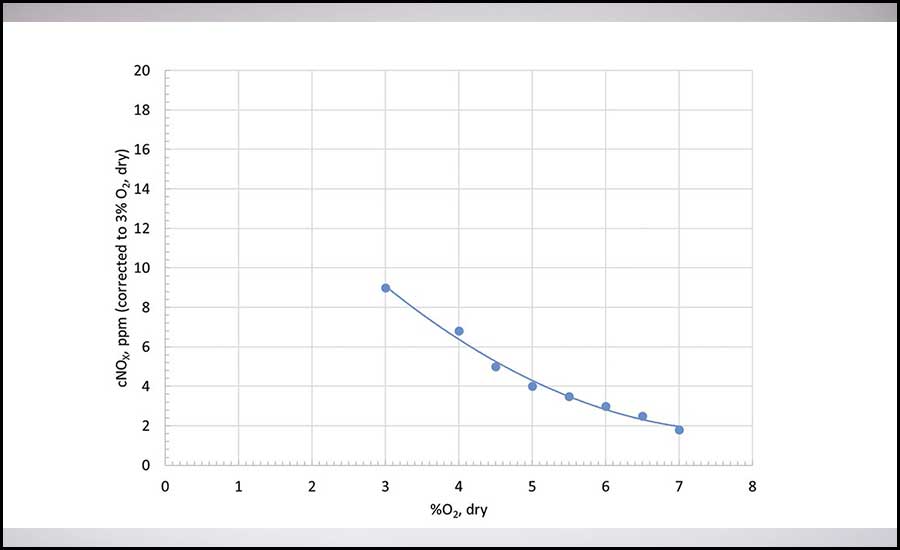 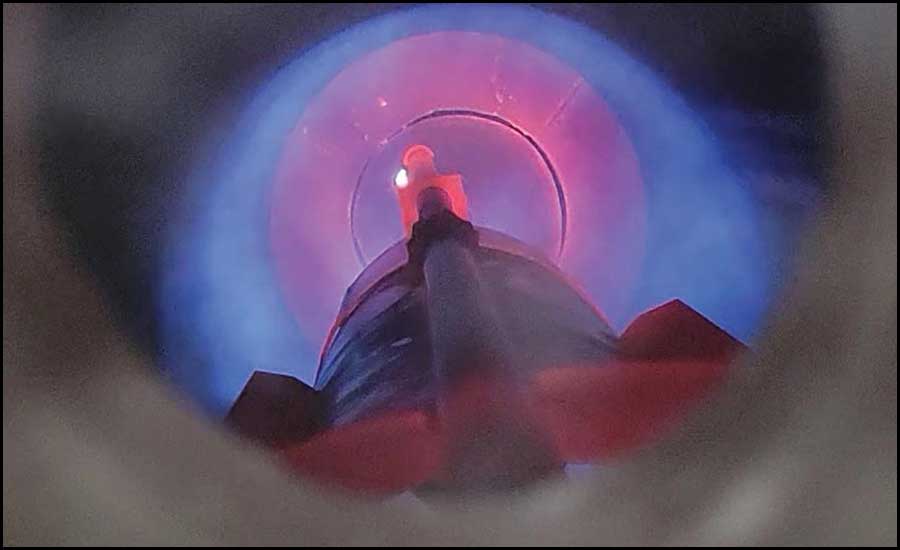 Figure 3. A photograph of the flame from the 125-HP ClearSign Core Firetube Boiler Burner.

Typically, this trend continues until there is a rapid rise in CO emissions indicating the formation of kinetic CO and onset of lean blowout. For this burner, CO breakthrough typically occurs around 10% excess O2. 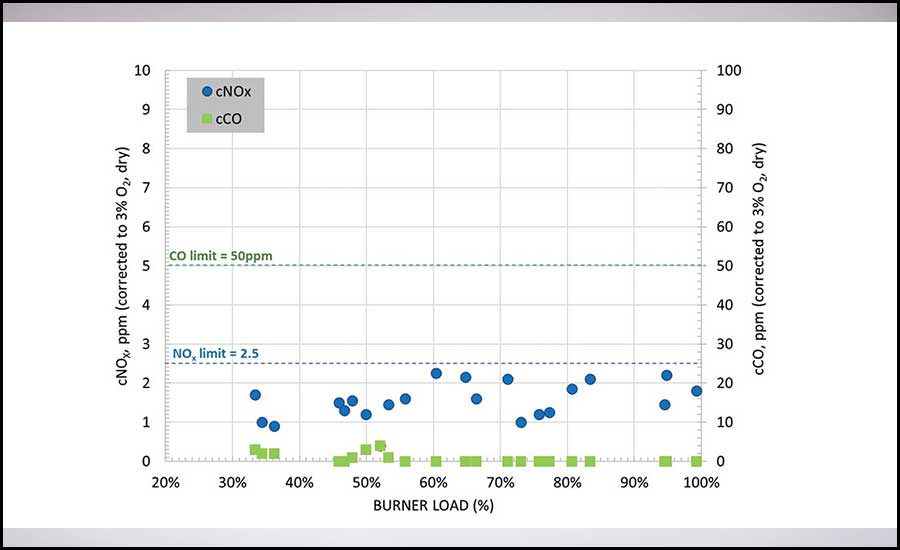 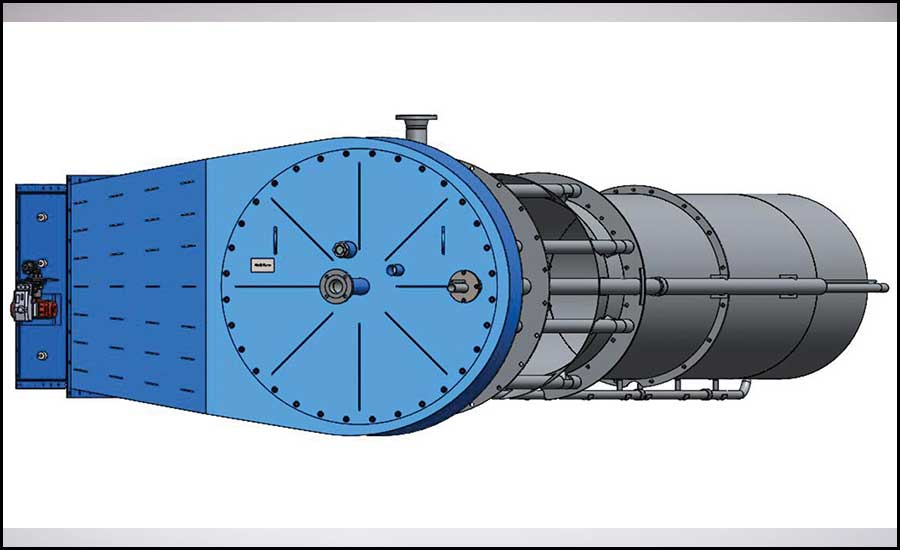 The burner was stable across a wide range of operating conditions of O2, firing rates, and available fuel pressures as low as 1 psig. The operation of the burner follows industry-standard procedures as well. The burner is lit initially using a spark-ignited premixed pilot and is a self-contained unit comprised of the blower assembly, firing head, ignition system, and flame safeguards.

ClearSign has partnered with California Boiler, a large boiler service company in California, to commercialize a complete ClearSign Core firetube boiler burner product line with sizes up to 60 MMBtu/hr. Local emissions regulations for equipment smaller than 20 MMBtu/hr. are sub-5 ppm NOx, corrected to 3% excess O2. For boilers larger than 20 MMBtu/hr., the NOx regulations drop to 2.5 ppm. As a result, ClearSign’s target for all Core firetube boiler burners is to be sub-2.5 ppm NOx. In addition, the burners are designed to work with standard available fuel gas pressure, meet sub-50-ppm CO, and achieve 3:1 turndown.

The first U.S. field installation of this product occurred on a rental boiler at California Boiler’s shop in Visalia, California, in August 2021. This was the first of multiple ClearSign Core firetube boiler burners being installed on rental boilers for use in California. The unit is a commercially available, 125-hp, 2-pass, Hurst firetube boiler. The maximum burner heat release is 5.2 MMBtu/hr. (HHV). The burner performance can be tuned on-site by adjusting the O2 to meet local NOx emissions requirements across a wide operability range. During testing and customer-witnessed demonstrations, NOx performance below 2.0 ppm (corrected to 3% O2) was routinely achieved. A photograph of the flame looking in from the front end of the firetube is shown in Figure 3.

In August 2021, a third-party source test was conducted to confirm emissions of the burner. The burner easily met the local regulatory requirement for NOx and CO across the full 3:1 turndown. A third-party customer was subsequently identified, and the boiler was transported to the site with the ClearSign burner already installed. The boiler was successfully connected, commissioned, and has been operational at that site since September 2021.

A separate 125-hp ClearSign Core Boiler Burner was also installed in a Jiangsu Shuang Liang 2-ton firetube boiler in China. Rigorous burner performance testing was conducted by the government testing authorities to ensure the following performance: sub-5-ppm NOx, sub-50-ppm CO, and 3:1 turndown. The burner met these performance criteria as well as other mechanical and safety requirements, and ClearSign received official certification from the Chinese government confirming the 125-hp (2-ton) firetube boiler burner is approved to be manufactured and sold in the Chinese market.

The successful 125-hp firetube boiler burner design was scaled up into a series of sizes up to 1,500 hp. The second field installation of ClearSign Core boiler burners was a 500-hp burner also in a rental boiler at California Boiler, as shown in Figure 4. Performance data for this larger burner was consistent with the smaller 125-hp burner, again providing extremely low-NOx emissions and exceeding the 2.5-ppm-NOx and 50-ppm-CO requirements at excess O2 levels between 6%-7%, as shown in Figure 5.

The ClearSign Core Watertube Boiler Burner has a similar architecture to the firetube boiler burners. A 2,500-hp (100 MMBtu/hr.) burner was built and tested at a ClearSign partner’s test facility in Tulsa, Oklahoma, and has demonstrated similar performance over the range enabled by the available test equipment. An image of the burner is shown in Figure 6.

Thorough mixing of combustion air, fuel, and high volumes of flue gas is a very effective approach to almost eliminate both thermal NOx and prompt NOx. Positioning of a burner’s flame stabilization element downstream of the fuel-air injection plane coupled with a properly engineered mixing section enables highly efficient entrainment of internal flue gases and thorough mixing to provide the full range of turndown required of modern boiler burners. Using this technology, burners successfully deliver sub-2.5-ppm NOx emissions throughout their operating range, offering an alternative to SCRs. The burners have now been supplied for several boilers in capacities ranging from 5 MMBtu/hr. to 100 MMBtu/hr.