Now that the majority of Americans are vaccinated against the virus responsible for COVID-19, many students will return to indoor classrooms in the next few weeks. While the threat of unpredictable and widespread illness from an airborne virus has diminished, parents still want reassurance that their child’s health will be a priority in the day-to-day management of their school facilities.

The focus that COVID-19 has brought to the management of school buildings, and, specifically, to indoor air quality (IAQ) is long overdue. Prior to the pandemic, the five areas for improvement in grades K through 12 to increase student success were:

While improvements in these areas are clearly important, an extensive study undertaken as part of the Building Educational Success Together initiative reveals, perhaps, a more compelling use of school funds. This study evaluated more than 750 public schools with an enrollment of 437,618 students and 26,700 teachers in the Chicago and Washington, D.C., areas. A statistical analysis weighed teacher assessment of educational facility conditions, student demographics, and standardized test outcomes. The two most frequent complaints from faculty members were overly large classes and poor classroom IAQ. Of these two complaints, teachers ranked poor IAQ as the most serious because of related illnesses and missed teaching days due to asthma, respiratory problems, and sinus infections.

Standardized test scores, another marker for academic success, showed that both demographic variables and IAQ were linked to student scores. After controlling for demographics, an independent relationship between poor IAQ and lower math and reading scores remained. The conservative estimate was that poor IAQ reduced individual student grades by 3%-7% and lowered the number of students performing in the highest SAT categories in both math and reading by 3%-4%. The conclusion was that improving IAQ was at least as influential as reducing class sizes.

Why Is Classroom IAQ so Important?

There is little surprise that IAQ affects the health of building occupants. Children, however, are especially vulnerable to illnesses from exposure to airborne chemicals, particles, and poor thermal conditions. During development, the tissues and organs of children are continually differentiating and maturing, making their actively dividing genes and cells more vulnerable to disruption from toxins in the environment. In addition, respiratory passages in children are narrower than in adults so any constriction from inflammation, infection, or asthma significantly reduces airflow to and from the lungs. Studies confirm that overly dry indoor air (relative humidity less than 40%) and other causes of poor IAQ are associated with student and teacher absenteeism due to asthma, allergies, and infections. For example, in the U.S. alone, children with one or more asthma attacks in the previous year missed an estimated 12.8 million school days due to asthma.

The influence of IAQ does not stop with the presence or absence of overt disease. Student concentration, memory, energy level, and hand-eye coordination — all components of cognitive functioning necessary to learn new material — are diminished when select indoor metrics are outside of ranges important for health. Studies that measure school conditions using an index of several variables consistently show improved scores on standardized tests as school conditions improve.

In short, many studies on the determinants of student success reveal that IAQ influences absenteeism, test scores, and teacher retention rates. 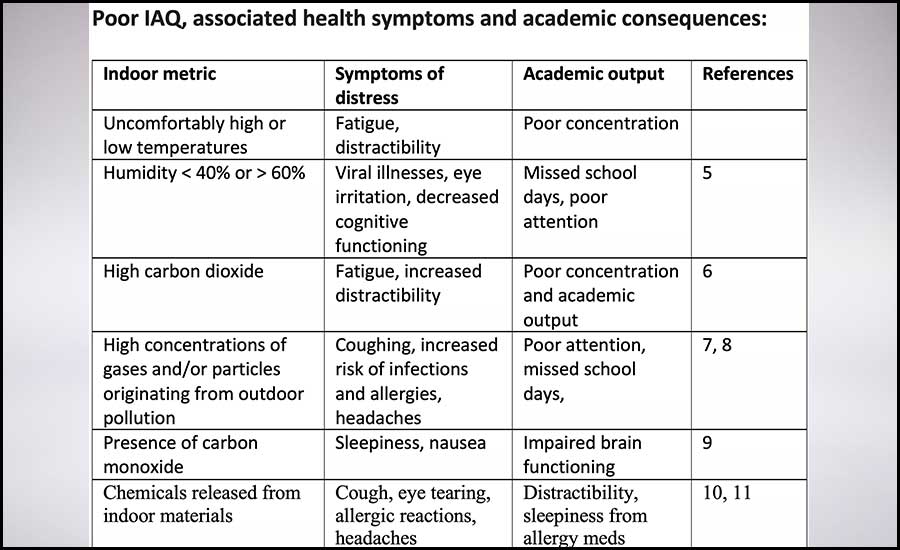 The relationship between IAQ and education also extends into the financial viability of public schools. A little-known and controversial correlation exists between federal funding and test scores in U.S. public schools. A prerequisite for ongoing federal funding of district public schools is continuous academic growth called adequate yearly progress (AYP). This progress is determined by student performance on annual Common Core achievement tests. While these tests are not officially mandatory, public schools lose funding if the tests are not administered. Schools that consistently fail to meet progress standards lose access to state and federal grants. After five years of failure to meet AYP standards, federal funding may cease altogether, placing extreme hardship on school budgets. Another financial strain related to student illness is the average daily attendance (ADA) rate of students in a school year. States allocate funds according to the school district's ADA. If numbers indicate a loss of full-time students due to excessive absences, funding is reduced.

What cost-effective strategies can schools implement to give parents confidence and protect student and teacher health and performance?

Laboratory studies in aerosol physics and building science can identify individual indoor air pollutants or thermal conditions that impact respiratory viral survival and infectivity. To create a cost-effective solution for managing the indoor environment to truly support student learning and teacher performance, schools must have an understandable, holistic, and actionable view of IAQ.

This can be achieved by continuous monitoring of the essential indoor components known to individually, and in combination, impact pediatric respiratory systems, brain functioning, and overall health. With the visibility created by monitoring and analyzing the health impact of indoor air components and thermal conditions, we have a clear path forward to optimize IAQ in schools, promote successful students, and preserve the financial viability of our educational system.