Industrial CHP on the Rise

The industrial sector has traditionally been a combined heat & power (CHP) mainstay. These facilities often require both on-site steam for industrial processes as well as reliable power. The last thing they need is blackout-induced downtime. Every hour a plant is down can represent hundreds of thousands of dollars of productivity losses. Hence, resiliency looms large in priorities.

That’s why the bulk of CHP facilities, these days, are fueled by natural gas. With abundant natural gas existing throughout the U.S., it is the go-to fuel for new CHP and combined cycle plants. Natural gas is becoming even more important in the energy mix as a greater percentage of wind and solar energy flood onto the grid.

Renewable energy has led to a sharp decline in coal-based power and nuclear energy over the past decade, but natural gas-based electricity production increased during that period. Looking ahead, coal and nuclear will continue to decline, but natural gas output for power generation is predicted to remain stable through 2050, according to the U.S. Energy Information Administration (EIA).

Natural gas is a major factor in most new CHP designs. Some facility designs include renewable elements, such as an on-site wind turbine or solar panels. Others add a dual-fuel capability so they can fall back on fuel oil in the event of an interruption in the gas supply.

The latter design was the preferred option for an industrial processing plant in the Midwest. It faced rising costs for both coal and electricity as well as regulatory demands to slash harmful emissions. The solution? A natural gas-fired CHP plant that works with waste heat boiler technology to boost efficiency, lower emissions, and satisfy its steam requirements.

It consists of two gas turbine generator sets from Siemens Energy and heat recovery steam generators (HRSGs) with supplemental duct firing from Rentech Boiler Systems. The result has been improved energy and operational efficiency, guaranteed resiliency, and a reduction in greenhouse gas emissions by nearly 50%, and CO2 emissions by 10%.

The engineering manager at the plant said the new facility reduces emissions by more than 2,000 ton per year, satisfies the facility’s steam needs, and enables it to realize significant saving by switching from grid power to generating its own electricity. The company can now produce all its steam and power on-site instead of having to buy electricity from the grid. 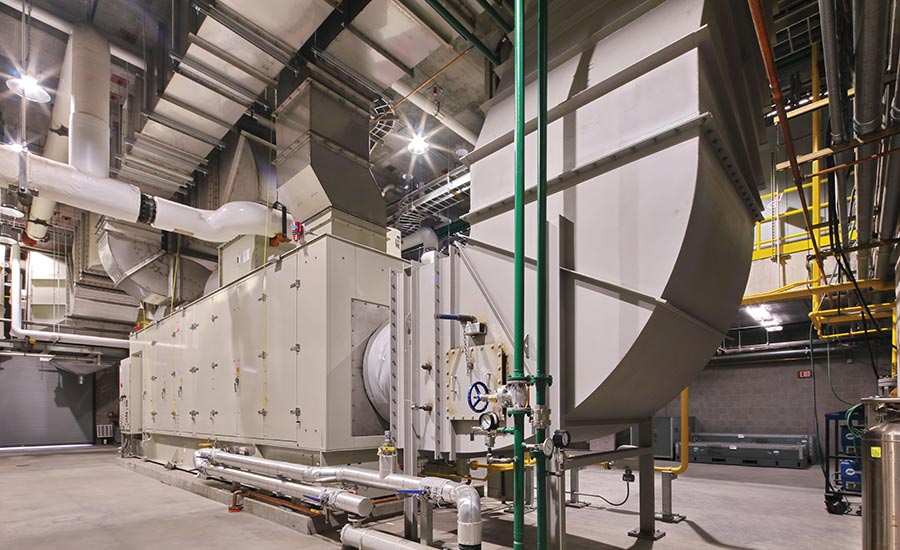 There are thousands of CHP facilities in the U.S., accounting for 12% of total generation.

The turbines provide more than 60 MW of power — enough to meet all facility needs. The engineering manager dismissed the need for bigger models as there were no plans to sell excess power back to the grid. The company maintains grid connectivity as a backup in case of on-site CHP system failure. A more important factor in the selection process was easy on-site maintenance as well as dual-fuel capability. The facility wanted to be able to run on both natural gas and liquid fuels so it could switch in the event of a shortage.

The HRSG offers the ability to recover heat that otherwise would be wasted. The 84% efficient Rentech units utilize waste heat boilers to recover energy from the exhaust stream of the turbines. The steam is vital for ongoing facility processes produced at 400,000 pounds per hour. When needed, supplemental firing duct burners for each HRSG can double steam production by raising the gas turbine exhaust temperature.

Successes like these are driving higher CHP adoption. In addition to reducing energy costs and lowering plant emissions, resilience is a big factor in the rising interest in CHP.

“Resilience is a key driver for CHP,” said Bruce Hedman, managing director and CHP systems accelerator coordinator at Entropy Research. “There are many examples of CHP keeping facilities running through blackouts, hurricanes, and other disasters.”

He noted there are 80.8 GW of installed CHP in the U.S. at more than 4,600 industrial and commercial facilities. This accounts for 7% of the nation’s generation capacity and 12% of total generation. Three out of four of these installations harness clean natural gas.

Harry Kumpula is the director of marketing for Rentech Boiler Systems.

The Art of Mobilization: Ensuring the Continuity of Industrial Production

Ford Transforms its Dearborn, Michigan, Location with a CHP Plant