How Brick Schema Defines the Digital Landscape of Smart Buildings

As commercial buildings continue to evolve in the global pandemic era, learning more about Brick Schema, and how it leverages metadata to influence healthy buildings, is critical for both consulting and mechanical engineers.

According to BrickSchema.org, Brick is an open-source effort to standardize metadata about buildings and the relationships between building assets. Using this metadata and information generated from sensors around the building, Brick is integral for delivering on healthy building concepts, including digital twins, personalized environments, touchless operations, automation, improved efficiency, and predictive maintenance.

The success of these concepts, however, is based on the thoroughness of Brick-based metadata and its coverage of as many systems as possible. Despite being from dissimilar sources, the data generated by devices labeled by Brick Schema can be collected and integrated into a single digital platform, a top-level need for the development of a healthy building ecosystem. Managing metadata and the data produced by system components gives building operators and owners the picture they need to operate next-generation structures. Just as important, it gives engineers the framework they need to help building owners and operators succeed.

A Closer Look at Brick Schema

Not sure what Brick Schema is, or what it does for a building? Let’s break the three primary concepts down: 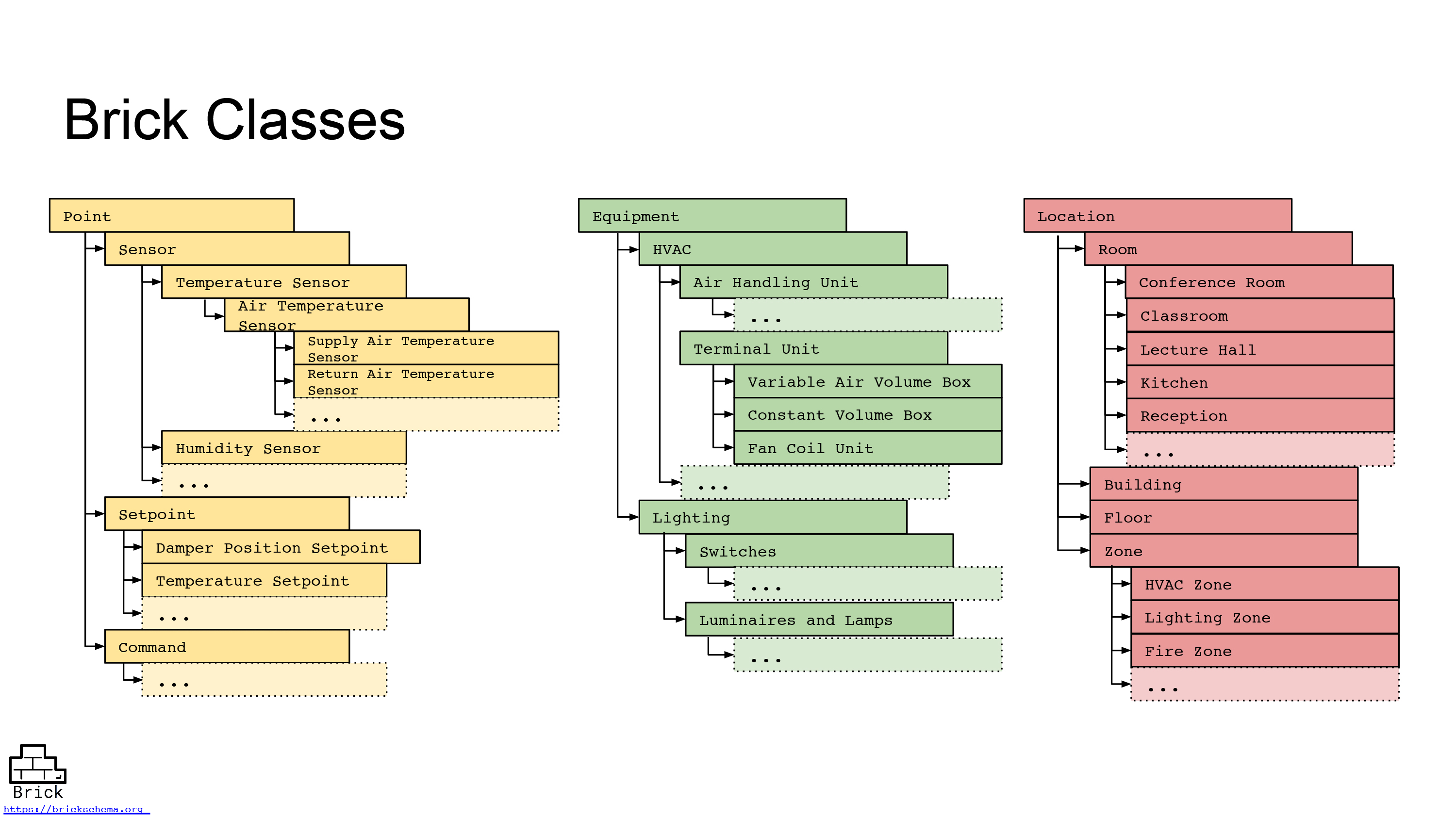 Figure 1. The Brick Schema organizes the “what” of a building into a class hierarchy, where each level is a more specific version of its parent. A kitchen is a specific type of room, and all kitchens are rooms, but not all rooms are kitchens.

Why Is a Common Language Needed?

By using a common language, different OEMs can manufacture building components and systems that can talk to one another during normal operations, including system setup. Additionally, since the data from all these systems and components are organized in a unified way, analytic functionality can be achieved. Taken together, these capabilities allow for the development of technologies and systems that monitor and control a whole building while maximizing efficiency decisions. The use of Brick in a building system should also be a must-have feature for any future purchases so that it can be properly integrated into your smart building.

The Value of Data

The assets labeled with Brick metadata aren’t stagnant — as they go about their normal actions, they (or sensors that monitor those assets) produce data about that operation. Using Brick Schema to sort, organize, and filter the operational data, building owners and operators can gain a deeper knowledge and insights about the relationships and status of all building components. With help from engineers, this sensor-created data, along with the Brick metadata, allows owners and operators to: 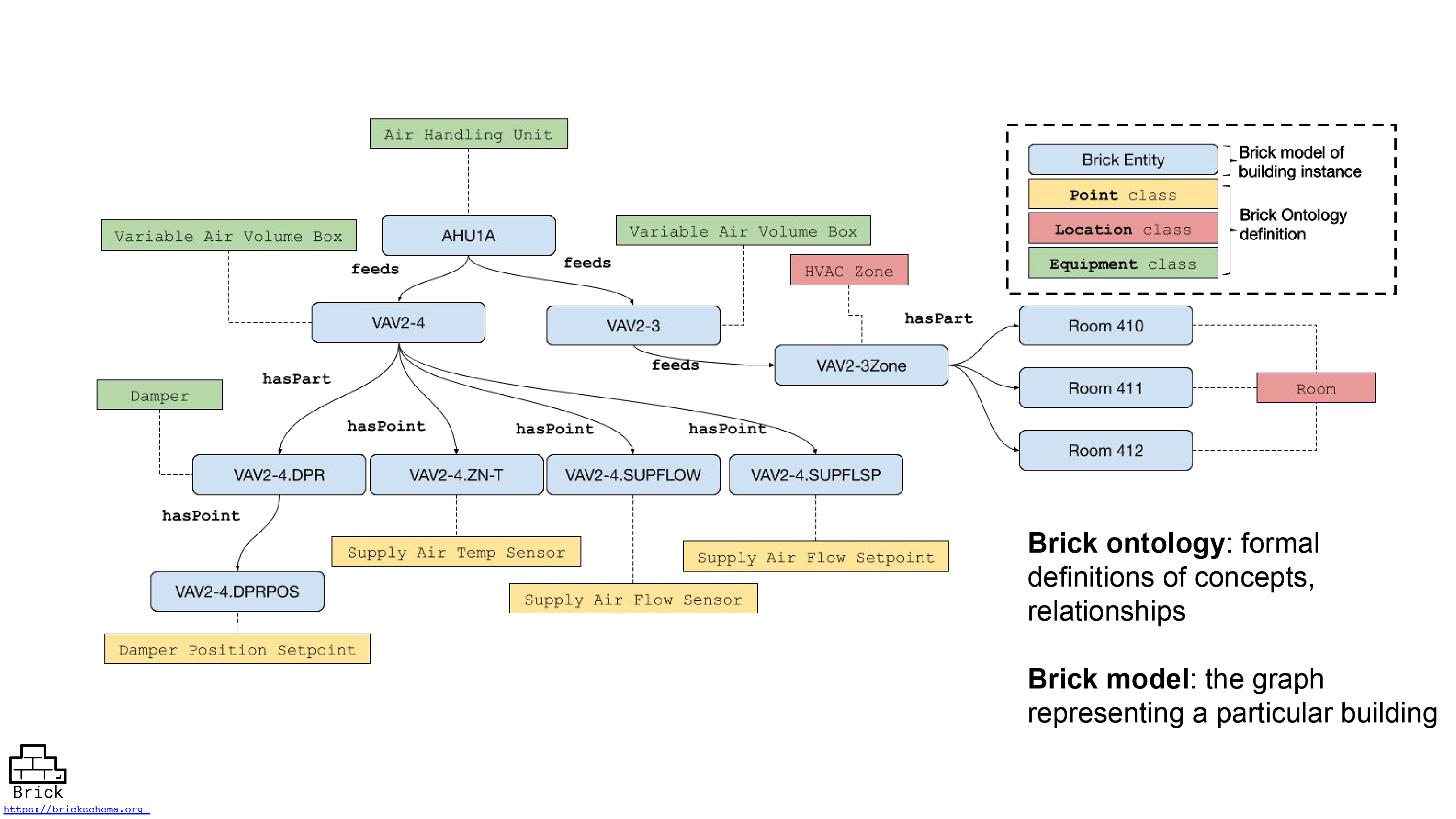 Figure 2. A Brick model defines the collection of items from specific instances of a building, using the rules of the Brick Schema/ontology. Here, the light blue boxes represent the actual items of a building: VAV2-3 and VAV2-4 are some of the VAVs of an actual building. The Brick Schema assigns metadata to those items: VAV2-3 is of class “Variable Air Volume Box”, and VAV2-3 “feeds” air to the “VAV2-3zone”. The Brick Schema defines the classes and relationships a person can use to model a specific, real-world building.

Brick offers many opportunities to utilize the concept of building components communicating with one another, which happens by exchanging and analyzing quality data through a central hub. Here are a few examples of how Brick can be utilized in a next-generation healthy building or smart campus.

The Future of Brick

What will Brick do for buildings in the future? For certain, it will only get more thorough in the amount of metadata it creates for use by a building’s operations hub. Additionally, more and more assets will be coded with metadata. Likewise, manufacturers will be charged with adding more functionalities with which to model in Brick. For building engineers and owners/operators, that additional metadata is the foundation for the constant improvement of the occupant experience and overall operation of a healthy building. Looking more closely:

The future certainly looks bright for using Brick, but what should building engineers do today to bring Brick to their operations? The best advice is to simply start planning for its implementation now. Most importantly, building operators and engineers need to work on cleaning up data and creating a consistent reporting structure. Having good metadata now will vastly benefit future translation needs.

Whether you are using Brick Schema now or are planning to use it for a future project, it’s important to both recognize and evangelize its ability to improve the operational capability of a building (or group of buildings). To gain that improvement, an investment must be made in this standardized dataset with a goal of deep integration into as many systems as possible. The greater the Brick integration, the more its metadata can be leveraged to boost efficiency, save on costs, and enhance occupant comfort

Dr. Erik Paulson is a Data Architect for Johnson Controls, where he works with AI Hub. The Johnson Controls AI Hub's mission is to infuse AI capabilities into products using a collaborative approach and working alongside multiple business units. Interoperable data models are key to that mission. Dr. Paulson is also the assistant secretary of the Brick Consortium, a non-profit, multi-vendor organization that supports the open-source Brick Schema project. He has a Ph.D. in Computer Sciences from the University of Wisconsin-Madison.