Across geographies and industries, commercial and industrial buildings rely on chilled water systems for a wide range of cooling processes. Despite their common use, these systems present specific challenges that must be addressed when they are insulated. The location of the system — both in terms of geography and physical placement — influences the design specifics needed to properly insulate or protect it. According to the U.S.

Environmental Protection Agency (EPA), outdoor air provides the majority of the annual humidity load for most buildings and should be considered when designing HVAC systems.1

Selecting improper insulation for a chilled water system can lead to a variety of problems, including reduced system efficiency, increased energy output, and higher operating costs. Moisture invasion into the insulation protecting cold pipes, like those in a chilled water system, may damage the insulation. Moisture can also create conditions conducive to the development of corrosion under the insulation (CUI), a costly problem in the industry. In addition, moisture can enable mold and mildew growth, which are of increasing concern as attention to IAQ continues to soar. These risks can prompt the need for unexpected or costly repairs and maintenance and cause pipes to drip onto ceilings, walls, floors, or equipment. However, designing an insulation system to mitigate or minimize the risk of these problems occurring is fairly straightforward — as long as the temperature, humidity, and operating conditions of the system are considered, and the insulation is properly installed.

Chilled water systems are used in a range of buildings, including commercial and industrial facilities; however, their utility also exposes them to a range of challenges.

Dry air becomes moist as it gains water vapor. Absolute humidity measures moisture content in air at a specific temperature (lbs./ft3x10-4; kg/m3x10-4). The results range from zero for dry air to saturation. Air temperature is important for the calculation, because as warmer air can hold more water, it has a higher point of saturation. Relative humidity — measured as a percentage — describes the amount of vapor present compared to how much could be maintained at a given temperature.

The warmer air is, the more vapor pressure exists (in.-Hg; cm.-Hg), as it describes the pressure when water, liquid, and vapor coexist. When the air temperature falls, that balance is upset and liquid water starts to condense as dew, establishing a new equilibrium. The temperature where condensation starts is the dew point. The difference in vapor pressure, especially in humid conditions, creates the challenges and problems for insulation used on chilled water systems. 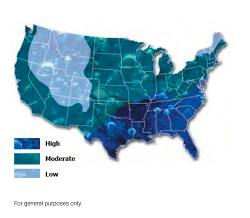 The physics of moisture’s movement across thermal boundaries should be considered. Heat naturally seeks equilibrium, and warm air will move toward a cooler space. In low-temperature insulated systems, vapor pressure can be higher at the outer surface of insulation than it is on the inside of insulation or against the cold pipe. As the elements involved attempt to reach equilibrium, water vapor seeks to flow toward the colder temperature, establishing vapor pressure drive. The larger the difference in temperatures, the greater the pressure drive. This drive occurs in most climates as chilled water pipes tend to range from 4.4°C to 7.2°C (40°F to 45°F) and typically function below the local dew point.

In warm, humid areas, such as coastal regions, there can be an ongoing tension with vapor drive. If that vapor pressure encounters permeable insulation surrounding chilled pipes, the vapor pressure increase on the outer surface of the insulation can drive moisture into the system.

Moisture condensing onto or penetrating into the insulation for a chilled water system can cause visible damage as well as problems that are harder to detect. Some of the most visible problems include water condensing on the outer layer of insulation prompting dripping onto floors, walls, ceilings, or equipment. Mold and mildew are other visible examples of a moisture challenge.

Less immediately recognizable forms of damage can occur when moisture invades permeable insulation. Moisture may start to corrode pipes, fittings, and hangers. It also can reduce the life of the system’s insulation and negatively influence its thermal conductivity. Environments located in climates with a high level of sea air, such as the Gulf Coast, present enhanced challenges. 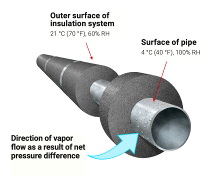 Chilled water system pipes can be colder than outside air, prompting vapor drive, especially when permeable insulation is used to protect the system. The difference in temperature between pipes and ambient air also can prompt water vapor to condense on the outside of insulation or chilled pipes.

Several of these issues could be avoided by correctly installing an insulation system designed to prevent moisture intrusion, such as one using an impermeable material like a closed-cell cellular glass insulation.

Selecting an insulation to minimize risk

Because chilled water systems in some environments can face continual pressure from vapor drive, the selection and design of the insulation used to protect the system needs to account for multiple factors. An initial goal of the design should be to keep the top layer of the insulation above the dew point for a range of ambient air temperatures. However, the type of insulation material used must be considered. If the insulation selected is open-cell or permeable, moisture can still invade outer layers to reach and condense in areas where temperatures drop, including against the chilled pipes. Using an impermeable, closed-cell material, like cellular glass, as an insulation helps mitigate this risk.

Additionally, the insulation used should face the appropriate testing, such as ASTM E96, or the standard test for water vapor transmission of materials. Using the “wet cup” testing method for this standard may most accurately simulate how the insulation would perform when used with a chilled water system in a humid area.4 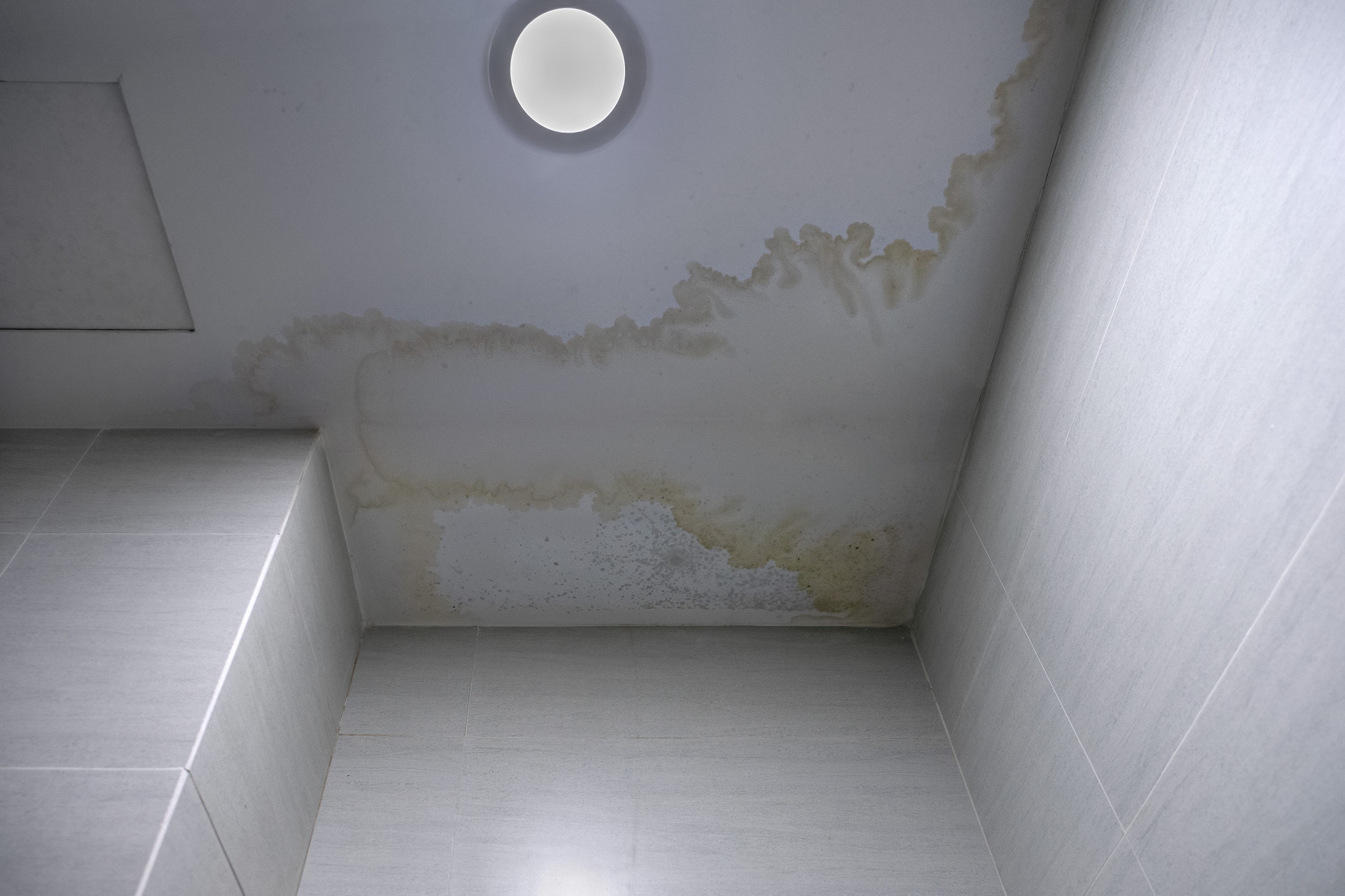 If chilled water systems are not properly insulated, they can be damaged by ambient moisture, causing reductions in energy efficiency, the development of corrosion, increases in thermal conductivity, and even the growth of mold and mildew.

The insulation design also needs to account for both the expected average humidity and extreme conditions. If it fails to account for fluctuation in potential conditions and for when the system is working outside of its normal parameters, then the insulation may not be robust enough to protect the chilled pipes against an increase in water vapor and condensation will be able to accumulate.

Startup and facility restarts can be periods where severe conditions occur, as some buildings start running chilled water systems before the building has been completely enclosed from the outside environment. This practice can exceed the design parameters for the insulation and open the system to water absorption or the development of condensation. However, if an impermeable insulation or a closed-cell material has been installed, the chilled system could have more resistance to the presence of moisture.

Real-world conditions can be important factors to consider when designing insulation for a chilled water system. There have been instances where an initial insulation design for a system in a humid area specified proper insulating materials only to see those elements changed to more permeable materials during value-engineering. Economics show the importance of avoiding problems posed by insulation that does not match real-world conditions where chilled water systems operate. Replacing a failed insulation system may be three to five times more expensive than initial installation.4

A potential approach to chilled system design and operating expense calculation could be to include prices for repair or replacement of permeable insulation when calculating initial system costs. This accounting also could consider reduced thermal insulation performance and the related heightening of operational expenses. Often, when initial operating expenses are calculated, these elements are not included.

Chilled water systems are a consistent attractant to moisture, especially in coastal or humid and warm areas. Moisture exposure can cause significant damage to efficiency, cost, and lifespan of a chilled water system. This challenge needs to be considered when designing an insulation system to protect chilled water pipes from ambient moisture and vapor drive. 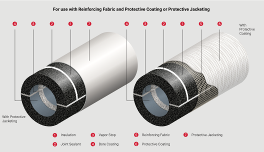 There are multiple design elements that can work together in the insulation used to protect a chilled water system from vapor drive and moisture, including the use of an impermeable insulation like FOAMGLAS® cellular glass insulation.

As with medicine, where an ounce of prevention is preferable to a pound of cure, a primary focus of the insulation designed for a chilled water system should be to keep moisture from invading the insulation and system. One straightforward way to provide that protection is to install a closed-cell insulation, like FOAMGLAS® cellular glass insulation, which is moisture-impermeable and non-absorbent. Additional design characteristics should ensure the insulation used is thick enough to maintain outer surface temperature to prevent condensation on the outer edge of the insulation and reduce the possibility of dripping.